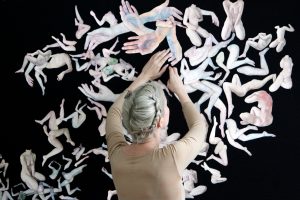 I first saw Klára Petra Szabó’s works at her exhibition with Austrian artist Florian Lang in June this year. I was very intrigued by the strong feminist messages of her watercolour works and installations. Many contemporary artworks need explanation so that we can understand what they stand for. But even without knowing about their background, Klara’s works were so captivating.

I started following Klára on Instagram over the following weeks. Online she allows her followers a sneak peek behind the scenes and I decided to just sent her a message and ask if she was interested in giving me an interview for The Pink Lookbook. The result was a very interesting talk about her path as an artist, feminist messages and how the Hungarian artist juggles being cosmopolitan and being close to her roots.

Klára Petra Szabó was born in 1981 and grew up in Hódmezővásárhely, a Hungarian town close to the Romanian-Serbian border. In the German speaking countries, the long name of this town is often related to the novel and 1950s movie “I often think of Piroska” which depicts a romantic view of the Hungarian Puszta. What a lot of people do not know is the rich cultural heritage of Hódmezővásárhely.

After Catholic school, she went to art high school and later on studied design at art university. Klára always wanted to be a painter. In contrast to many others, her parents were totally supportive of her career choice. Klára assumes that their support may also relate to the fact that she only has one kidney, which affect her every day’s life. “I think they just wanted me to be happy.”

Klára has always been exposed to art. Her hometown has a long history of art – it used to be an art centre 100 years ago and there still are annual art exhibitions. At the age of four, Klára won a drawing competition – her talent and passion for art were already very obvious.

Klára herself describes her art as body-related: “It is about how we represent ourselves and our body.” In the beginning, she focused on fashion-related topics, such as fashion as representation of time periods. When we see a picture of the 1970s, for example, we immediately know it is from the 1970s because of the clothes. Year after year, Klara’s work became what she describes as “simpler” – I understood it as an increasing focus on the body itself rather than the clothes we use to cover it up. 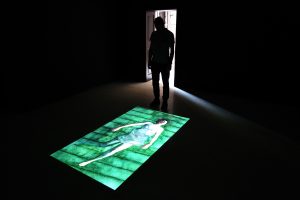 The artist uses a wide range of techniques and media – “Ophelia” is one example.

One really interesting project was her work with prostitutes in the Netherlands in 2011. Her conversations with the women revealed that they see the body like a work tool, therefore, distancing themselves from their own bodies. Klára was intrigued by that perspective and worked on the work “Untitled” which was comprised of big boxes. She scanned the bodies of four prostitutes and covered the body with thermo paint. Visitors can then touch the black paint and see the female body through your hands.

These conversations and the resulting work were a big milestone for Klára’s work. She started to think more and more about the body and started to work with her own body. “I think it’s just more honest if it’s myself.” Furthermore, this strategy allows her to be independent of finding the right nude models.

A Wide Range of Techniques and Media

Klára’s work spans over a wide range of techniques and media: from paintings to (animated) installations and videos.

“I am not able to express myself in a single painting. It naturally evolved that I started using multiple techniques.”

For her animations, she paints everything first, then scans it and later on manipulates the drawings to turn them into digital animations. This process is quite intense. It takes about three months from start to finish of a short animations (mostly the loops). There are more than 150 frames involved – all of them are handpainted.

When she paints, Klára works with water colours. She mainly started working with them due to technical reasons: this technique allowed her to paint in her small dorm room. When she met with her later husband, she could just bring the watercolours and immediately start working. For most of the works, Klára does not make any pencil drafts, she mostly starts painting immediately.

I was mostly drawn to Klára’s work because of their strong feminist messages. When I visited her exhibition, the first thing I noticed was her focus on female body parts – hands, legs, the upper body etc. Her collages use a black background and I feel that they had a strong movement. “Piece of Me”, for example, shows two hands revealing a kidney and a woman’s body. At first I thought it was a depiction of Klara. “Actually that’s my twin sister.”, Klára says. “I have two of my sisters’ remnants in my body (in small embryo shape). One of them in my kidney’s place. That’s why I have one kidney.”

Similar to my experience, many women immediately connect with her works while men very often do not understand it. “They might say ‘Ah, nice boobs.’ and move on.”, Klára laughs but we both agreed that a lot still needs to be done when it comes to the understanding of feminist art by the largely male-dominated art industry.

When I asked her why she chose to deal with strong feminist messages, her answer is simple:

“I come from the Hungarian countryside, and usually the countryside is more conservative and sexist. Furthermore, the whole art industry has still a long way to go to achieve gender equality.”

It confirmed what other women in the arts have told me before: Female artists are gaining more recognition. Nevertheless, the art scene is far from being an equal space.

This year, Klára received the “Tornyai- plakett”, a reputable art award of her hometown. She was the 13th woman ever to receive it in the almost 70 years of the award. 53 winners were male.  Klára told me that she sees the difference how she is treated compared to the male artists. But this also made her reflect on what she can do differently to be seen: “It’s not enough that I’m talented. I have been criticized that in contrast to my former husband who holds a fine art degree, I ‘only’ have one in applied art.”

At Klára’s exhibition in Eisensatd this year, I was immediately drawn to “And Everything Will Shatter”.

The artist refers to a common view in the art industry that applied arts (such as design) is inferior to fine arts.

“There will always be excuses or criticism if people want to use them. But I learned that I have to get out there and socialize within the art scene. I socialize with peers and curators. And I learned how important it is to attend openings: One day I complained to my gallerist that I didn’t get many invites to art events. She looked at me and said: ‘Are you surprised? You never go there anyways and people don’t expect you to come then.’ I think women in general underestimate the power of socializing and networking. It’s good if you’re talented but there is so much more.”

Klára realized that she was so focused on her work only that she did not think consider socializing as crucial. Since then she has made an active effort and saw it pay off: she started to become an active member of the Hungarian art scene and also uses international residencies to broaden her network. She did agree with me that socialising for women can be a slippery slope: When men head out for drinks, is it appropriate for women to join? Would they be judged? Men never even have to think twice about this.

“But I do see that something is changing, very slowly, even in the countryside.” 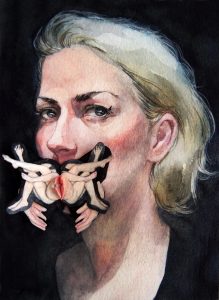 Even though Klára has strong ties to her roots in Hungary, she is a citizen of the world. When I first looked at the list of all her residences and exhibitions across the globe, I was amazed with the sheer amount of countries in which she has worked. Given my passion for Asia, I was very interested to hear how Klára ended up in South Korea: “I always wanted to go to Japan and won a residency programme. In Japan I heard a lot about Korea and thought I would just try and apply to go to Korea. I think in a lot of ways, Korea and Hungary are very similar: the food and the culture, especially. I made friends there and I ended up spending more than a year in Korea. I’m fascinated how the country evolved in so many ways. On the one hand, it is such a high-tech country, on the other, traditions still play a big part in everyday life. Given the high-tech focus of the country, digital art is very advanced and also heavily influenced my work.”

Klára realized very early on the power of social media for the visibility of young artists. Furthermore, social media allows her to not only keep in touch with her friends all over the world but also facilitate a life between travels and working in Hungary. Klára uses Instagram as a tool to connect with her followers all over the world. Naturally, a big portion of her followers are based in Asia and she uses the platform to keep them up-to-date with her life. On her account she allows us to see the work in progress but also very personal stories. “I use Facebook mostly for friends, Instagram is where I’m in touch with people and what I use for my work. Otherwise I’m invisible.”

I asked Klara if she agreed with the view of Croatian artist Igor Eskinja’s that today it is possible to work internationally while still keeping a strong focus on your region and even live in the periphery (ie. outside of the big art hubs). (You can read Igor’s interview here.) She agreed and attributes this fact mainly to the internet and social media.

“I need the slow life for my mind. I still work from my hometown where I have a big studio, my friends and family. If I need more inspiration, I just travel. International residencies give me freedom but the travel makes me tired as well. Hence, I will come back to my ‘safe castle’ to put my mind at ease.” 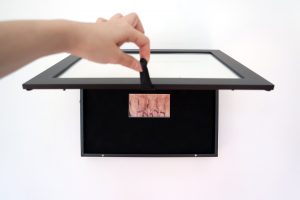 The artist plans further residences abroad, such as the Artist in Residence Progame at Q21/Museum Quartier in Vienna (Q21/MQ AIR).I am excited to see the further development of Klara’s art. She is definitely an artist to watch. 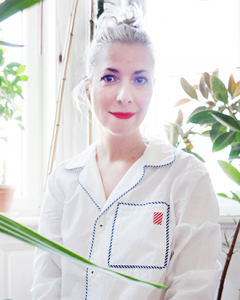 Klára Petra Szabó studied at the University of West-Hungary in Sopron, Hungary and the Folk Academy of Helnaes, Denmark.

In addition to exhibitions in her home country, the artist has participated in residencies and exhibitions in South Korea, Sweden, Austria, Estonia, Serbia, France and Dubai, amongst others.

She lives and works in Hódmezővásárhely, Hungary.

More Women in the Arts to Watch

Curating in the Digital Age – Interview with Alexandra Schantl

All information as of the date of publishing/updating . We cannot accept responsibility for the correctness or completeness of the data, or for ensuring that it is up to date. Based on the personal experience of Elisabeth Steiger, no fees were received.

Shaping Our Society as an Entrepreneur – Interview with Amelie Gross