Vienna is famous for its music and its imperial heritage. But did you know that Vienna used to be a fashion capital? In the 19th century, department stores where landmarks of the Viennese inner city districts offering the latest fashion from France, Italy and local designs. Many of us do not know that the majority of these department stores, which are still part of Vienna’s shopping landscape, were founded by members of the Jewish community. Furthermore, there used to be a garment district in the heart of Vienna. The exhibition “Buy From Jews! Story of a Viennese store culture” at the Jewish Museum in Vienna, Austria, takes you back to the shopping streets of the 19th century and will introduce you to a Vienna you might not have seen before. 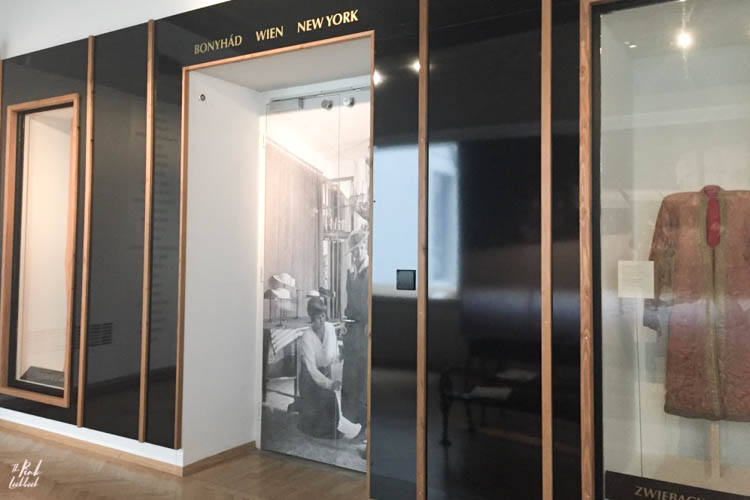 The start of the exhibition makes you feel like walking along the Graben shopping street in the 19th century with the walls decorated as shop exteriors.

At the very start of the exhibition, the visitor is taken back to the shopping streets of Graben, Kaernterstrasse and Mariahilfer Strasse – in a very literal way. The first room is designed like the outside of a store displaying beautiful garments in the shop windows. The red thread throughout the exhibition is the family heritage of well-known names like Gerngross, Braun & Co or Knize. Gerngross is still one of the biggest department stores in Vienna. When you stroll down Graben, you can still see the shop signs of Knize. On the corner to St. Stephen’s Square (Stephansplatz), the beautiful house of Braun & Co is still a landmark. Unfortunately, the building was sold to a fast fashion chain some years ago. I still do not understand the decision. Anyways, the inside of this building makes you feel like boarding the Titanic – with intricate decoration and a beautiful staircase and elevator. 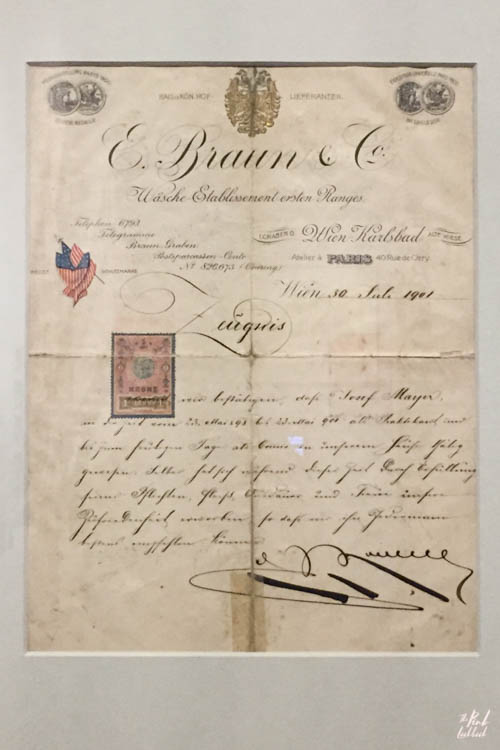 Certificate of Braun & Co – The Braun & Co building is one of my favourite in Vienna. It is truly stunning. Unfortunately, the building was sold a few years ago and now hosts a fast fashion chain…

Furthermore, also the lesser-known so-called “suburban department stores” Dichter and Wodika are represented in the exhibition.

I found it really interesting to hear about the different family histories, be introduced to their customers, staff and designers as well as to the architecture and the setting in the 19th century. 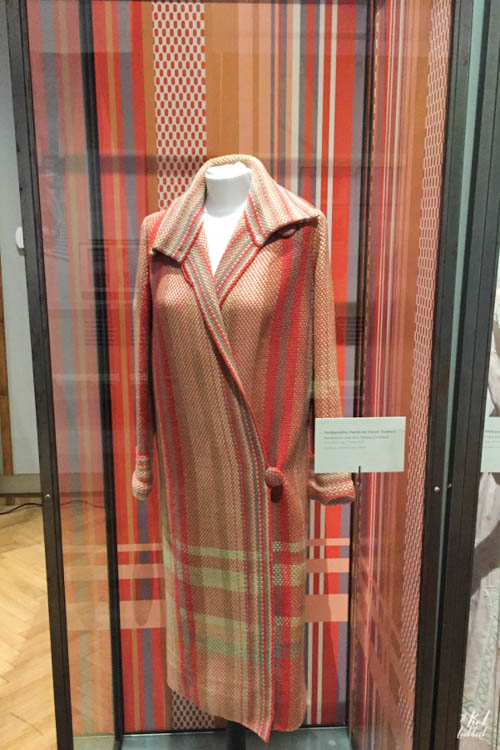 Can yo believe that this coat is from the 1920? It looks so modern, I love the design! Handwoven coat by Maison Zwieback, Vienna, Austria, 1920s

If you are familiar with Vienna’s sad part of history, it will not be a surprise that this department store and fashion culture vanished almost completely during the Shoah (note: i.e. the Holocaust). The exhibition does not stop at this point, however. Success stories of Jews in exile abroad of, for example of the designer Ernst Deutsch-Dryden, speak for themselves. Nevertheless, a lot of the families could not rebuild their Viennese successes abroad. Very few of them returned to Vienna after the Second World War. 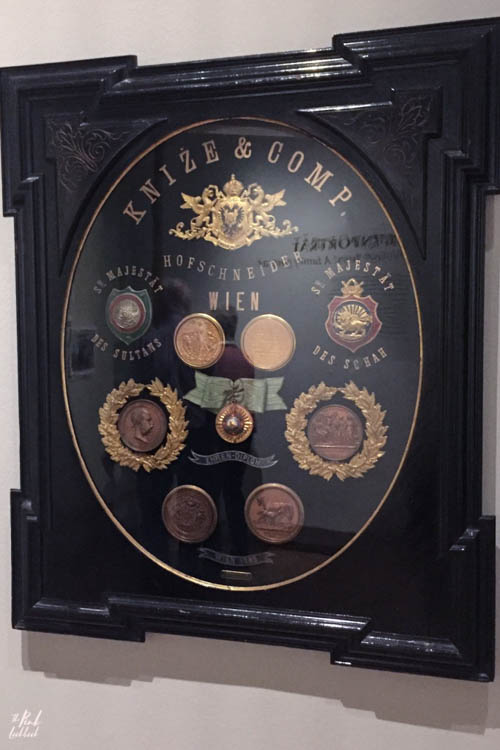 Company sign of Knize & Comp., one of the most famous stores whose shop is still at Graben

The ones who did return contributed to a contrasting development after the war: the heart of Vienna was home to a garment district. This, again, shows the clear links to the Jewish community: up until the mid-19th century, Jews were only allowed to trade in “Fetzen” (note: Austrian word for used fabric; it has a negative connotation). After this law was abolished, Jews were setting up department stores on the major shopping streets. After 1945, stores like Schoeps (which was a very popular clothing chain until the mid 1990s) were part of the garment district development in the 1940s. Until today, some names of the successor companies are still household names in Austria. 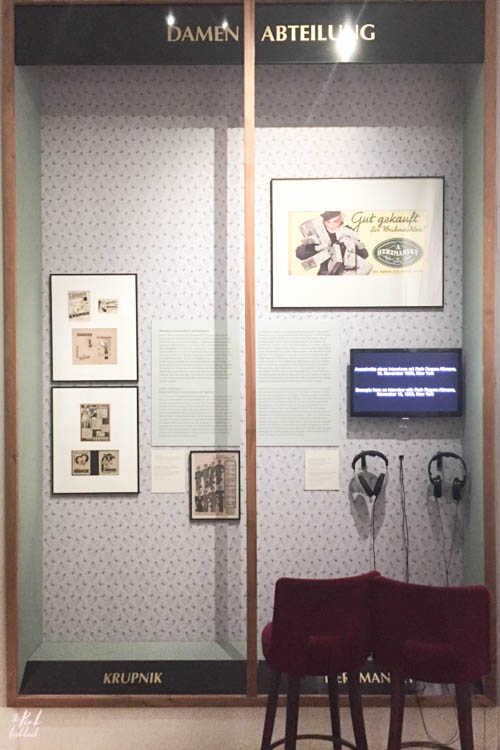 The exhibition shows a lot of attention to detail and innovative design. Audio stations are hosted in shop windows.

If you wish to get to know a different perspective of Vienna, I highly recommend this exhibition. It is very interactive and truly interesting. I really enjoyed learning more about Vienna’s fashion history and also see the beautiful objects. What I appreciated most was the way the Jewish history was woven into the family stories. Unfortunately, most of the exhibitions about the history Jews link to the sad parts of our history. But this exhibition shows it in a way that celebrates the families and encourages us to move forward even in the darkest times. 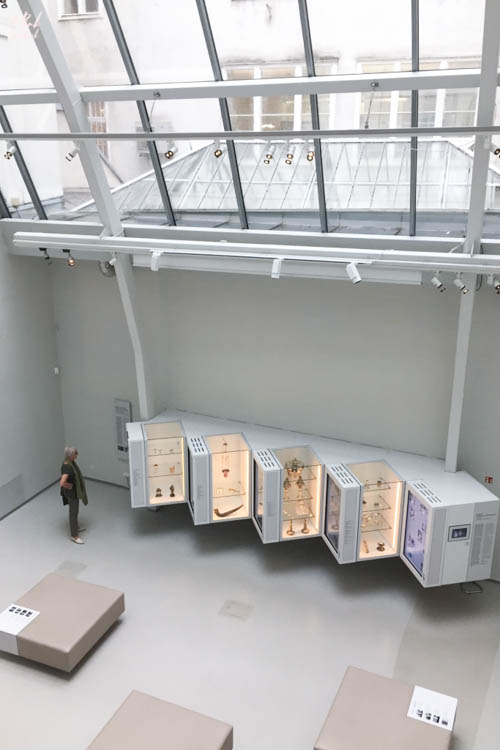 The permanent exhibition at the Jewish Museum Vienna is one of the highlights of the Viennese museum landscape.

“Buy From Jews! Story of a Viennese store culture” (“Kauft bei Juden! Geschichte einer Wiener Geschaeftskultur”) at the Jewish Museum Vienna at the Dorotheergasse branch (there are two branches of the museum) is open until 19 November 2017.

Tickets: Adults EUR 12 (about USD 14), concessions are available, children under 18 enter for free 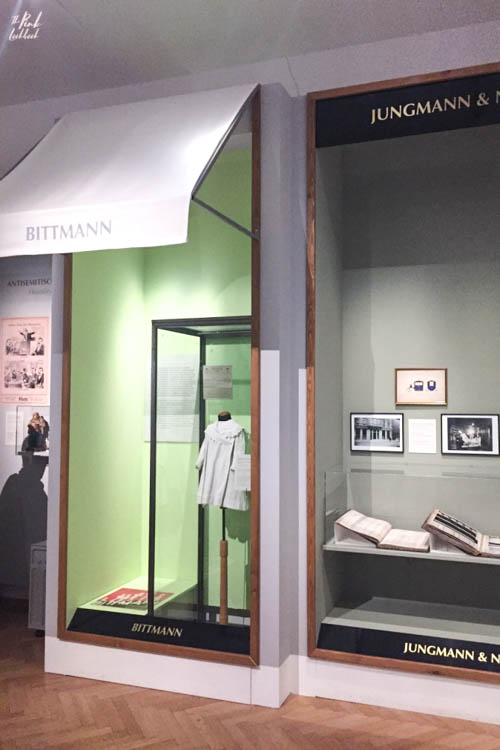 Sources: The above text is based on my own experience during the museum visit and the information provided during the exhibition and the press release.

Business Style Guide – What to Wear in Vienna in Winter 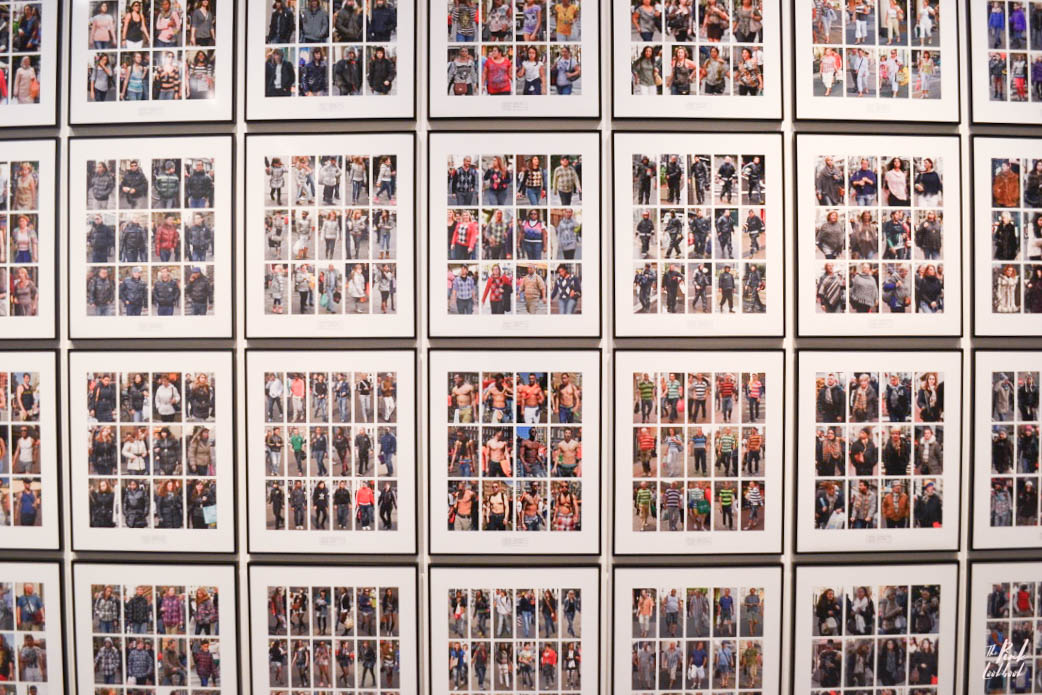 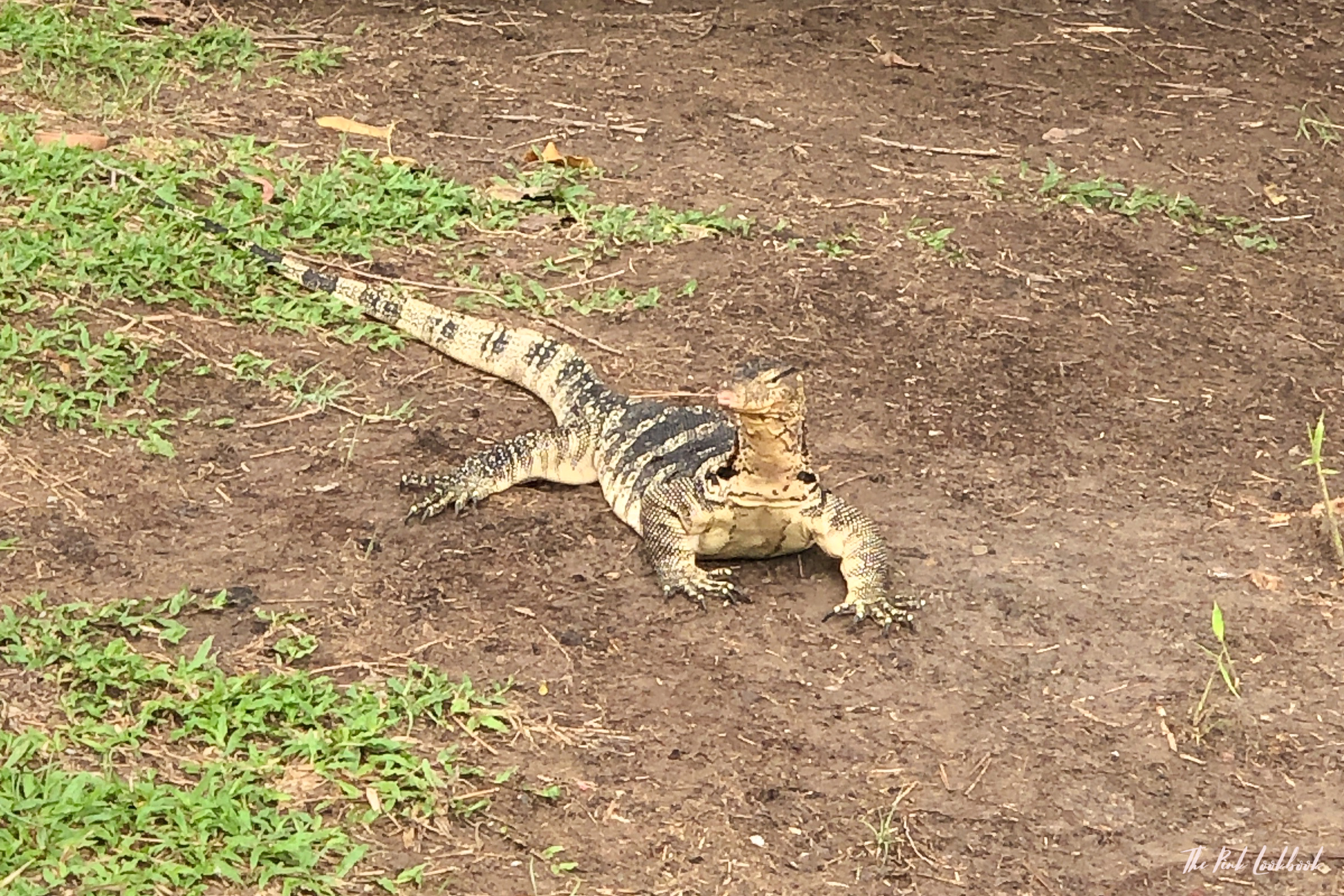 Bangkok Off the Beaten Paths – Meet the Lizards in Lumphini Park