During my seminar about contemporary art in Croatia, I got the chance to meet artist Igor Eskinja at the Rijekan art collective Delta 5. He was part of a panel discussing the local art scene and the preparations for the European Capital of Culture (which will take place in Rijeka in 2020). After the panel, he showed us his studio and works and I was really intrigued by his open approach and personality.

Igor’s works have been shown around the world, at Manifesta Biennial amongst others, and he also teaches at the University of Fine Arts in Rijeka. I was excited when Igor agreed to give me an interview and really enjoyed our talk covering his personal and artistic path, his view of the Croatian art scene as well as discussions about current political developments in Europe. 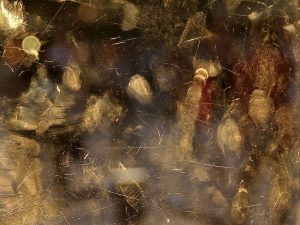 Igor does not have a specific story about why he ended up as an artist. He has always been interested in art and already as a child he liked to draw and paint. He does not come from a family of artists – his parents worked in completely different fields and a large part of his family are doctors and engineers. Nevertheless, his parents were supportive of his choice – under one condition: “If you choose it, choose it with all the consequences.” Igor still appreciates his parents’ open approach.

Another factor “facilitating” his career choice was the war in former Yugoslavia. At this time, even “solid” jobs did not guarantee an income. Everybody had a big existential problem and precarity was very present. Everything was out of control. Probably under normal circumstances, the arguments for his career choice would have been different. According to Igor, everybody has to find a way to deal with their profession after university. “University is like a safe space where we acquire certain knowledge and skills. But they do not prepare us for the reality. When we graduate, we need to deal with that reality.” He has a lot of friends who – contrary to their training – never worked as lawyers or in business.

Igor considers gaining experience abroad as crucial. He studied and worked in Italy and did residencies abroad. Nevertheless, his base is Rijeka. Ephemeropolis, 2016, installation, variable dimensions, digital print on textile

During the seminar, we learned that due to the lack of an art market in Croatia, a lot artists leave for other European countries. I asked Igor about his opinion.

“We speak about everything, not only art. A lot of young Croatians have left for Ireland, Germany, Austria since we joined the European Union. When it comes to art, we need to bear in mind that art always deals with realities. The realities in Berlin and Croatia are different. Hence, we will also have a different view and possibilities.”

However, he also mentioned that a lot of artists who moved to the West experienced that they often did not have the same opportunities as locals. Even though the opportunities abroad seem much bigger, it does not mean that you cannot live in Croatia and successfully work as an artist.

Igor is a strong advocate for gaining experience abroad. He considers it necessary to move and gain a different perspective. He himself studied in Venice, spent seven years in Italy and attended residencies in Berlin, Paris and New York, amongst others. However, his base is Croatia. The important thing for him is that he lives in Croatia but he tries to be present in different places.

The main centre of art in Croatia is Zagreb. But Igor’s hometown Rijeka will be the European Capital of Culture in 2020. Project room, 2011, 90×120 cm, c-print on dibond

Igor agrees that Croatia is a very small place. “But if it motivates you to work, the periphery can be great. Provinciality is problematic but I do not see it in Rijeka.” From an artistic point of view, out of this small community of about 30 artists, a few artists have been represented at prestigious events such as Documenta, Manifesta and the Venice Biennale. Similar to the Zagrebian art scene, which is stronger than the one in Rijeka, the community is like a family – a peripheral one but yet not provincial.

Rijeka will be the European Capital of Culture in 2020. For this event, Igor is currently working on a project which is closely related to biology: he is reinterpreting the traditional floral wallpapers which were popular in Europe in the 18thand 19thcentury. Flowers usually represented wealth, richness or wellbeing. His idea is to collect weeds – plants which are growing by themselves – and create new wallpapers. On one level, Igor is interested in working with plants, learning about biology and producing wallpapers. On a second level, he wants to establish analogies between plants and societies: there are exotic plants, some plants fight for territory, some are more traditional. Hence, these plants represent a social dimension of human society. It is closely linked to an atmospheric dimension: it is not something you see but something you feel.

Igor leaves his works to accumulate over time an makes connections between them later on. Untitled, 2010, 120×200 cm, c-print on dibond

Furthermore, with this project, Igor aims at producing an artwork which is meant to be in the background; similar to a desktop image. It should still have its meaning but serve as a stage for other activities. Nevertheless, it is not a decorative item, it is a work of art. Usually artworks are meant to be in the foreground, they are meant to shout and attract attention. “In the Renaissance, especially in Flemish homes, paintings were covered with curtains. The images were so powerful, they could not be present all the time.”, Igor explained. Today, the production possibilities are very different from 18thand 19th century wallpaper production. Microscopes, artificial intelligence, etc. may lead to new interpretations of wallpaper. Hence, Igor’s wallpaper will be a referent to biology but also current modes of production.

Igor considers his artistic development a natural one. There is a series of works which interests him and he leaves the works to accumulate over time. He then makes connections between the works.

“Sometimes I work on a project and I am not completely happy with it or sure about it. I just leave it. And maybe after some time, a year or so, I present it.”

The topics for his artworks come up naturally. “Maybe in that moment, there was something I considered interesting. Some topics develop over time, for example, the question about the image. I actually never was a painter. I am interested in visual language and creating a space within the artwork, how to show the artworks and how exhibitions are made.” 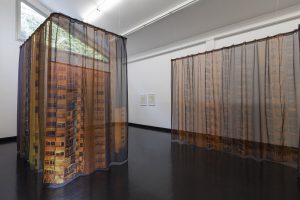 Igor is also very much interested in the fragileness of an artwork and the process of accumulation. Ten years ago, he worked on carpets made of dust. It was nothing fixed. When visitors came by, they left traces and interacted with the work. Dust itself is almost invisible, but when it accumulates it becomes visible. In his artwork, invisible traces in some moments became visible in others. Igor plans how he engages the viewer and what is the position of the visitor. 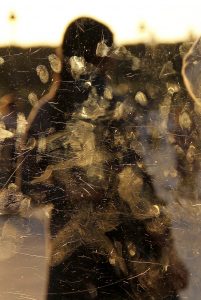 According to Igor, curiosity is the most important factor to understand art. Some artworks speak to us directly, others may need explanations. Golden fingers of Louvre, 2017, 82 x 55cm, archive print on aluminium

A challenge of contemporary art is that a lot of people consider it too abstract. Due to the difficulty to understand the artworks, they are often even considered rubbish. I asked Igor if he thinks that art, and contemporary art in particular, needs to be explained to be made more accessible.

“The most important thing is to be curious. If you are not, you like or dislike the work on a very superficial level. Sometimes, an artwork is so appealing that we do not need an immediate explanation. We can learn about it a bit later. But sometimes, artworks do not speak to us in a direct sense. All approaches are absolutely valid. For me as an artist, it is important to give some context.”

Nevertheless, he stresses the importance of avoiding mere definitions of artworks. A simple definition does not add any value.

“Artworks should create different stories – not one narrative and one point of view. Art is a meeting point. Maybe you see something in my artwork I did not see and you can add this experience to my work. Artists create works until a certain point. Then the societies add narratives to some works. What are the masterpieces? Are they not also created by society? Even over centuries, we can still find meaning in them.”

We closed our conversation discussing the role of the art market and private patronage. Due to my business background, I am always interested in the relationship between artists and private institutions. However, during my trip to Croatia with different representatives from the art scene, I realized that there was a strong opposition to accepting private funding. It seemed to me that funding by companies was considered “dirty money”. However, due to the lack of an art market in Croatia, artists heavily rely on public funding. My question for Igor was if an artist accepts money from a government whose values contradict his/hers, is this not worse than taking money from private institutions? Igor, started laughing and immediately agreed with a big smile.

“The moral question is really difficult. We sometimes glorify certain governments even though we know that they supply other countries with weapons, for example. It is a paradoxical thing. And I do think that there are really good private initiatives out there.”

Igor thinks that culture is one of the main contributions of Europe to humanity. Project room, 2011, 90×120 cm, c-print on dibond

Igor stressed the importance of culture in the European context. “Culture is what we as Europeans bring to humanity in global terms. I can see a lot of movement across Europe into a populist direction, cutting funds for culture and making it disappear slowly. Dissolving the European project economically and culturally is dangerous. We are one big family with different languages and need to build on this strength.”

Igor Eskinja was born in 1975 and is a Croatian artist and professor of the Academy of Fine Arts in Rijeka. He studied in Venice and spent seven years in Italy and attended several residencies abroad. His works have been exhibited around the world. He lives and works in Rijeka. 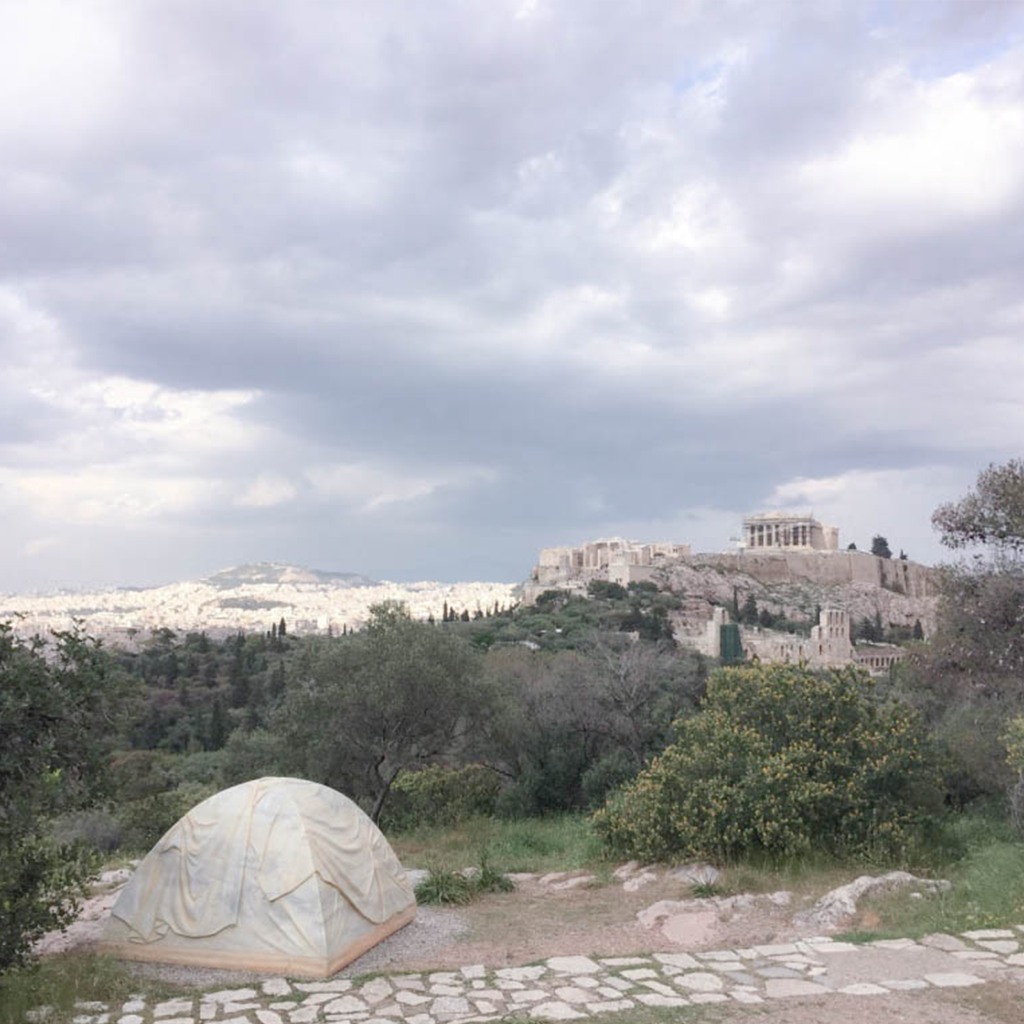 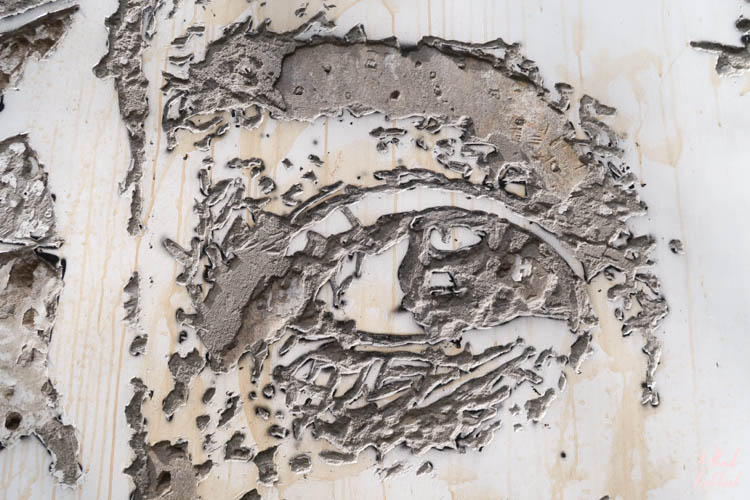