Before I met Johannes, I was not really sure what to expect from our meeting. My friend who studied with him already told me ages ago that I had to meet this artist. Finally, I managed to be in Austria and meet up with him. During my research before the interview, I discovered that he is also a professional Yoga trainer. That was an interesting combination, I thought. Was he going to tell me that I have to adopt a spiritual lifestyle? That he cannot live without art and Yoga? Or would it be an interview about the meaning of life? Well, it was not. But actually, it kind of was. I got to meet an artist who at the same time turned out to be an inspiring personality captivating his interlocutors with is positive attitude towards life.

Johannes and I met at Figar in the Wieden district of Vienna. It is an up and coming area which reminds me a lot of Berlin. I was prepared to meet a guy in Yoga pants, maybe with a beard and long hair and a lot of these yoga bracelets around his arm. However, a guy with a denim shirt and a red baseball cap was waiving at me. OK, maybe artists and Yoga teacher have changed their style… 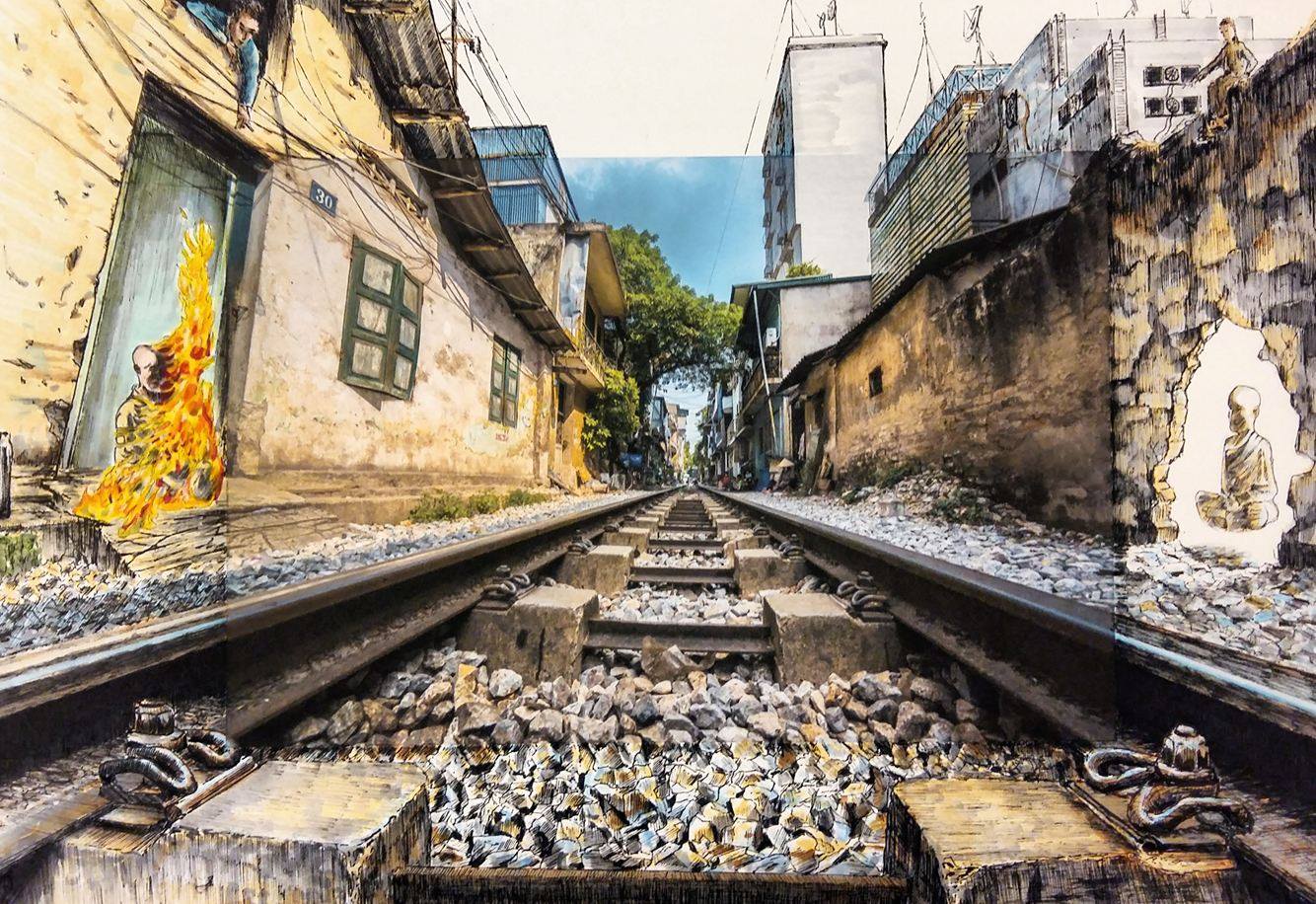 The works by Framed Diversity – a collaboration of Johannes Baluch and Michael Eliasch. While Michael is the photographic brain, Johannes extends the works with his drawings.

Even though we have never met each other before, Johannes immediately started to talk very openly about his art, what he thinks about the art scene in Vienna (not too much, but let’s get down to this a bit later) and how he ended up where he ended up.

Within minutes, he made me forget all the clichés about the art world – I really liked his hands-on mentality. If he worked with curators for his last exhibition for his art project Framed Diversity, I ask. He starts smiling and answers with a clear, ‘No. We did everything ourselves. It’s so easy, I just looked for a room, I invited the people – people who have nothing to do with art. And every time we do this, we sell the majority of our works.’ I was really surprised, because I recently learned from another interview with a curator that these methods would work in Berlin but not in Vienna. Obviously, this guy does things very differently. And it seems to work. Johannes calls his inclusive and unconventional approach the secret ingredient to the success of their exhibitions.

In his works, two types of media are connected – photography and art. Johannes’s art works without explanations and that is what he likes about it. I ask him what he thinks is the reason why people like or buy his artworks. ‘Weil’s geil ausschaut und weil’s cool is,’ (‘Because it looks amazing and because it’s cool.’) he answers in a very casual Austrian way with a big smile on his face. 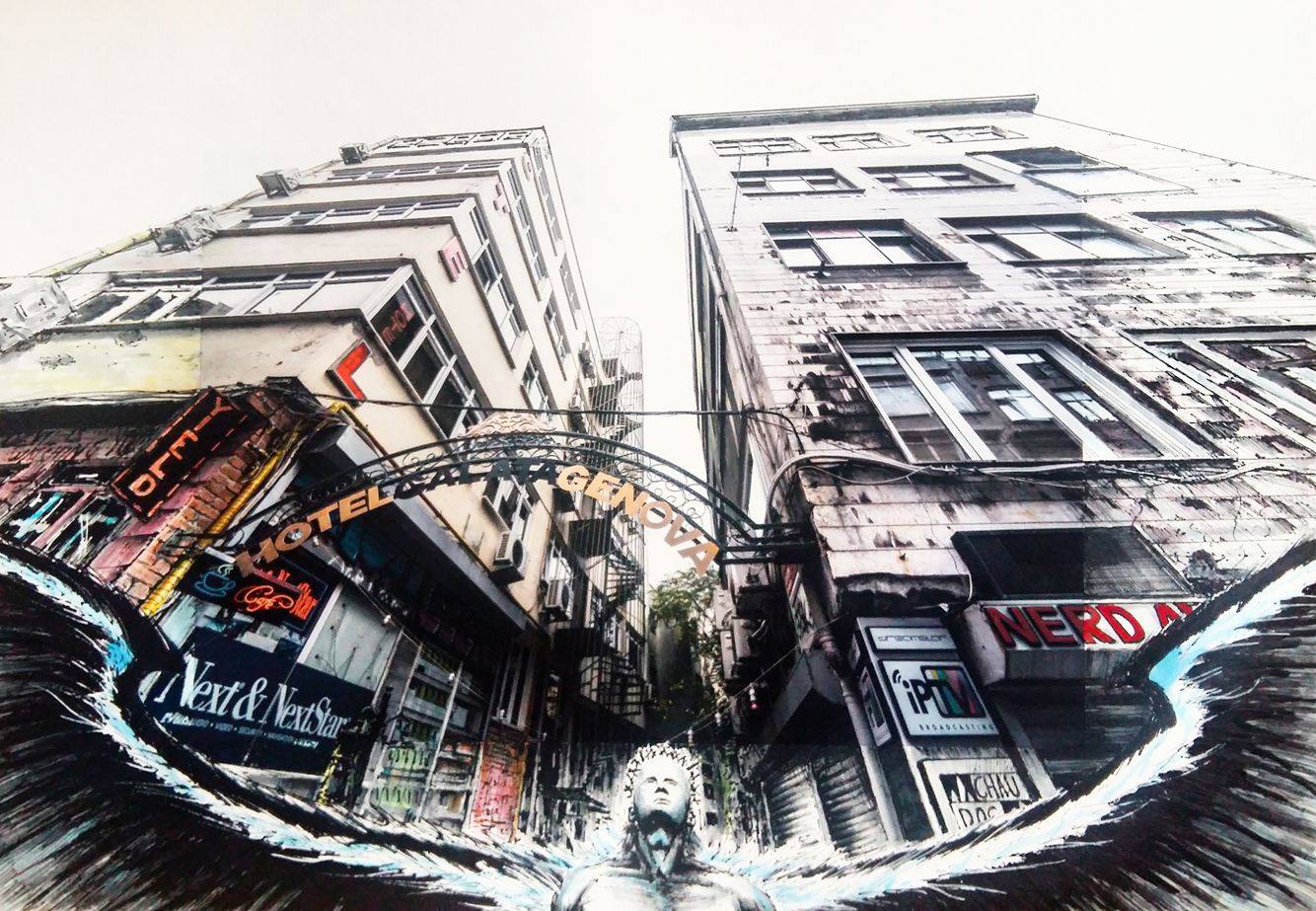 Reality and imagination go hand in hand – you have to look closely where they overlap.

Johannes works with his artistic partner Michael Eliasch, a passionate photographer. Johannes builds on this photographic work and draws around them. They do not intervene into each other’s contribution. Johannes works with whatever Michael gives him. ‘I could tell him: next time, you should work with this or that angle. Or work with this and that topic.’ But I don’t do that. I don’t know what he felt when he took the picture. I want him to do his work and want to be able to do mine. With our different strengths, we complement each other very well. And this way of collaborating works well for us.’ Their works are available in four formats and price-wise they are in the lower middle-range. According to Johannes, this could also be a reason why people like their art – because it is more accessible. Johannes draws whatever comes to his mind in that moment – spanning from architecture to even Marvel characters. He thinks this use of every day life elements is another factor which makes his art more relatable. 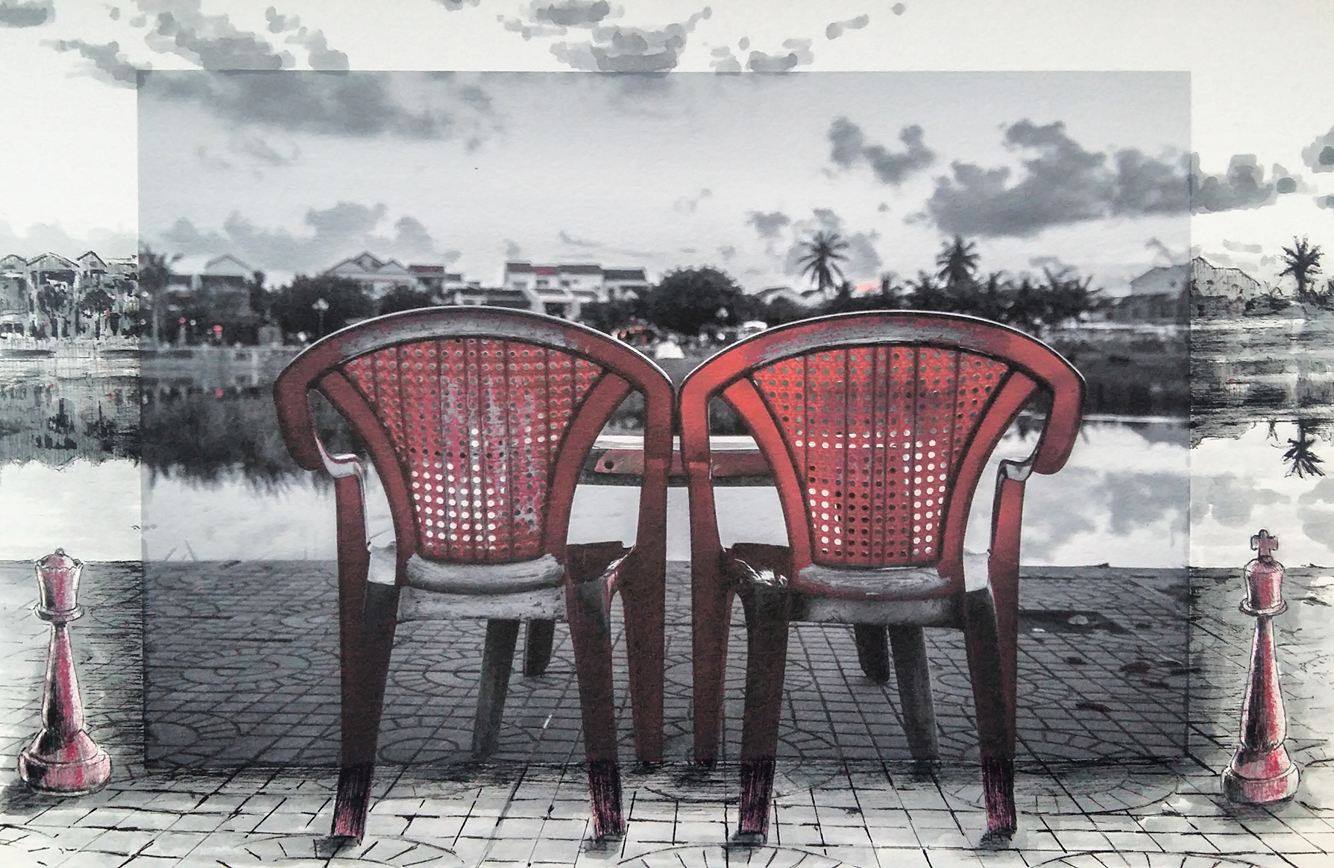 With his works,  Johannes aims to make the viewer look beyond the things or topics we would usually look at.

“Art is there to provoke and to make you look somewhere you would not look by yourself. It is there to make fun of our society and has to be radical. It is a tool to test our boundaries.”

In general, Johannes agrees that the majority of contemporary art needs explanations. However, this bears the risk of being very elitist: ‘You have to go to the museum, read a lot about it, maybe even take a guided tour and then reflect on it. The average person on the street will not do that.’

Johannes tells me that now is the time to do anything you want. It has never been so easy. He talks about his mum’s passion for knitting and that in today’s world, it would be so easy for her to set up a business and spread the word even with a small budget. Furthermore, information is easily accessible. However, in the end, it depends on you if you make something out of it. He tells me that he is not particularly good at drawing human beings from memory, he needs the support of some examples. But he thinks this does not mean that he his a bad artist. ‘I don’t have to be the best artist in painting waves, if I haven’t done that before. I just go online and look for tutorials. You will find the best people sharing their techniques with you.’ 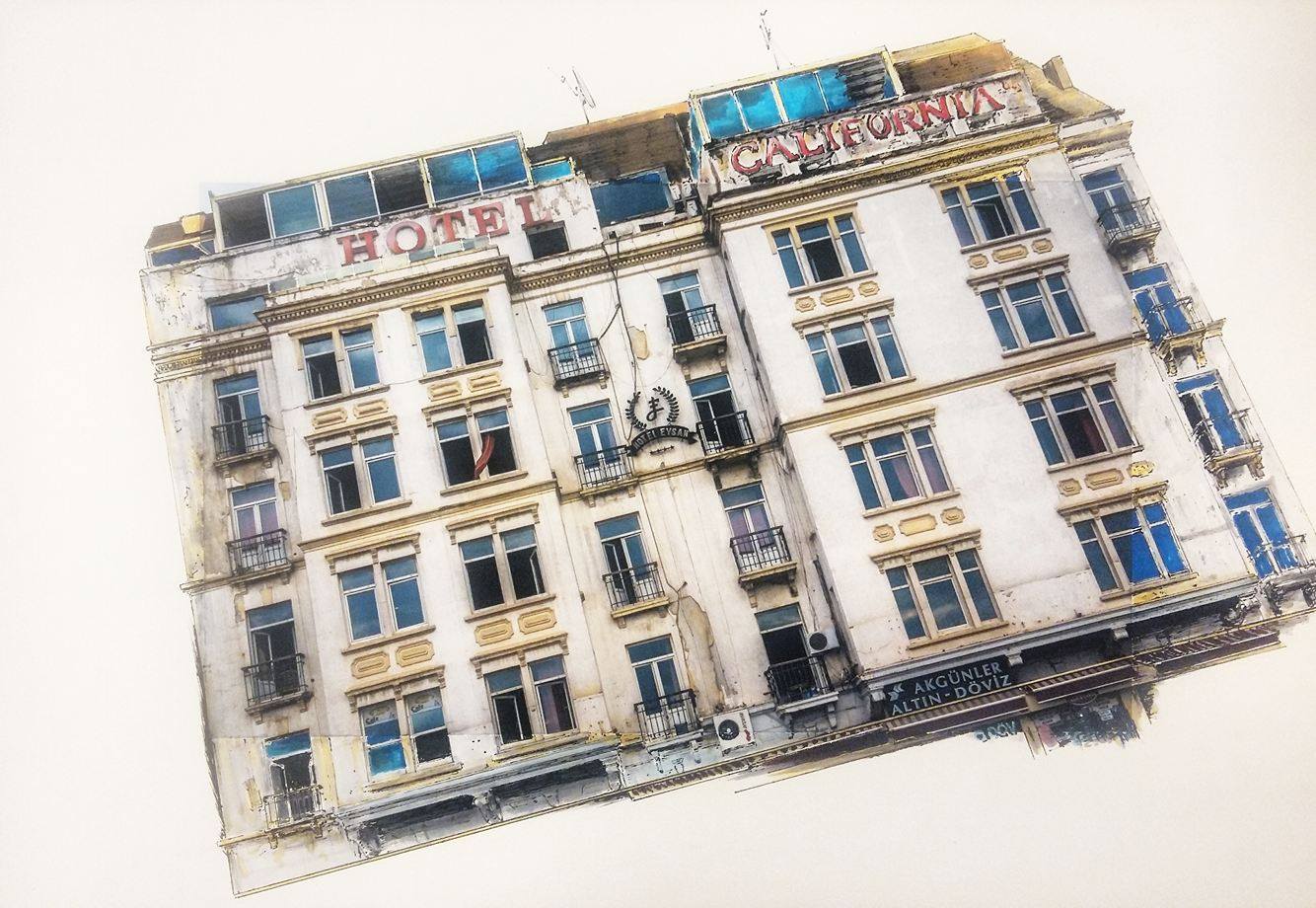 Johannes thinks that big political movements might change but people are affected by their daily lives, which he wants to capture.

When I ask him how he and his art are affected by current political events, he tells me that, of course, there were times when he occupied himself with topics like the refugee crisis. But as he is somebody who tries to always see that the glas is half full, he decided to work with humour and lightness instead of heaviness and grief.

“Art becomes a weapon if it affects people in their daily lives. Whether the political landscape changes or not, does not matter. It is the subculture in which we move that matter.”

Because of that, Johannes occupies himself with basketball, women-men clichés, mystical things and even video games or Magic cards (note: he calls himself a nerd). He thinks that all of these things make him relatable. However, it took him some time to find that out. Johannes studied sports and visual arts. In his view, instutions like universities also make it difficult for young artists. Often, they are scared to do what they really want to do because they might risk getting criticized in a really bad way.

Johannes tells me the story of a fellow student who had a passion for body painting. However, this type of art was not considered as art by their professor, who then criticized and discouraged the student. In his view, it would be better just to let young artists do whatever they want to do and explore. Who has the power to decide what is art and especially what is good art?

“Wer entscheidet so einen Scheiß?!” (Who decides on this shit?) 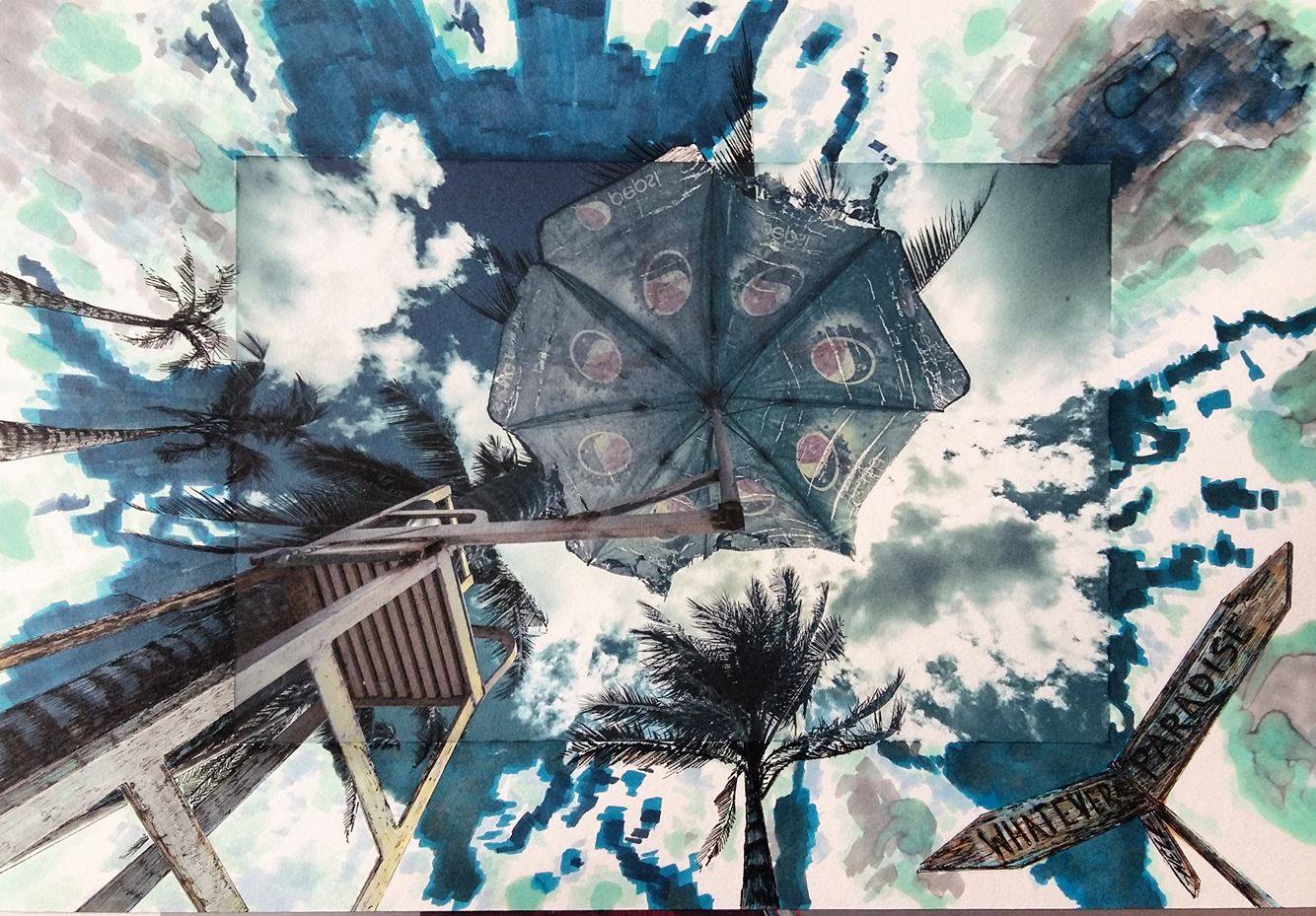 When you talk to Johannes, his positive attitude to life is contagious. He really makes you look on the bright side. But not with a spiritual “you can do anything approach” – he is very realistic and down to earth. I guess this makes him and his art relatable.

Because of his background, Johannes does not consider himself as a ‘typical’ artist and he also does not spend too much time within the Vienna art scene. It would probably limit him too much. He does what he wants to do – whether this relates to his art, sports or general lifestyle. What really captivated me was his positivity that we can basically achieve anything we want to do. He is obviously not a big fan of excuses like ‘I don’t have time’ or ‘I don’t have money’. He is somebody who just does it. And this was refreshing to see.

Johannes used to be a competitive athlete – he did Judo for a very long time. And had a very different attitude to sports compared to now. When he was younger, he considered injuries as proof that he worked hard, he had to keep going. Now, he sees them as a symptom that something is wrong with his body and/or his mind. This shift was caused by him venturing out into Yoga, which he actually started by accident.

Today, he calls himself a “movement scientist” and sees sports – not only Yoga but everything he enjoys doing – as a way of “servicing” the body. No matter which job you have – whether you are a manager, a shop assist and or an artist, you need to fuel your body with the right input. He thinks people who do Yoga are more connected, more sensitive and feel more things. Sports like weightlifting or Crossfit might make you stronger and more target focussed but not necessarily more sensitive. Moreover, he would not be able to be an artist without sports. And vice versa: art is his balance to sports. I found that bit particularly interesting – usually, everyone would tell me during the interviews, sports is their balance.

“Yoga made me more self-confident for my art. But maybe it was also me getting older and more experienced. When I had ten kilos more because I built up muscles, I seemed to be so confident. Everybody thought ‘Johannes can do it, he is strong,’ and women were throwing themselves at me. But actually, my self-esteem was really low. Now, I am much more balanced. Yoga helped me to know what I want to do and say ‘this is what I do and it’s great’. Before that, I used to give away artworks for free. Or I did stuff for other people I actually was not interested in. Today, I only do what I want to do and I also charge people for my works. They are worth it. “ 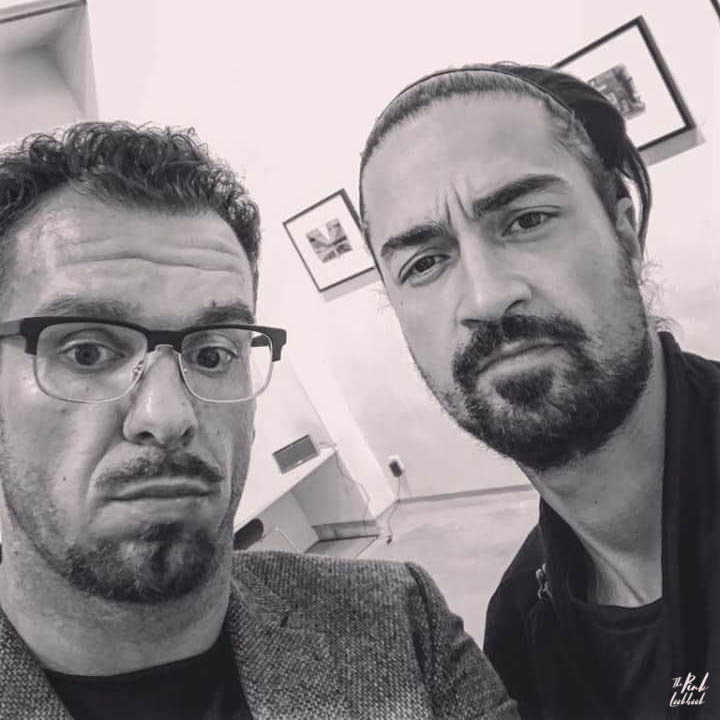 Johannes with his artistic partner Michael.

A Shooting Star on the Fashion Horizon 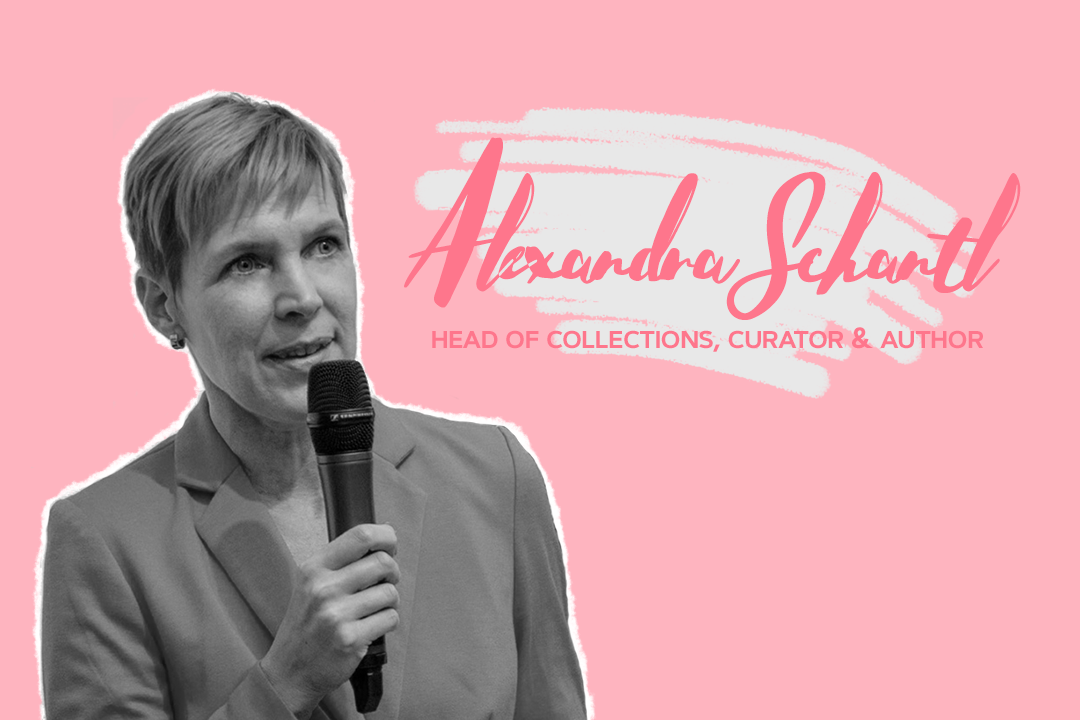 Curating in the Digital Age – Interview with Alexandra Schantl, Head of Collections for Art after 1960 of the Cultural Department of Lower Austria