Wiener Neustadt is not on the bucket list of the typical tourist coming to Austria. It is also not very known by locals as day trip destination. Because of its importance as a major aircraft manufacturing hub, the town was heavily destroyed during the Second World War. Therefore, a lot of the beautiful historic buildings had disappeared and today’s Wiener Neustadt is characterised by 1950s buildings and a centre which is dying out because of the malls right outside of the town. What most people do not know is Wiener Neustadt’s interesting history as a major trading and industrial hub. Furthermore, it was one of the bases of the massive Habsburg empire.

Currently, the “Landesausstellung“, a biennal exhibition by the State of Lower Austria, is hosted in Wiener Neustadt. And its positive impact can be seen throughout the small town. I have visited the exhibition and have put together all the information about the exhibition itself, logistics and further activities. Of course, I have written a personal review as well. 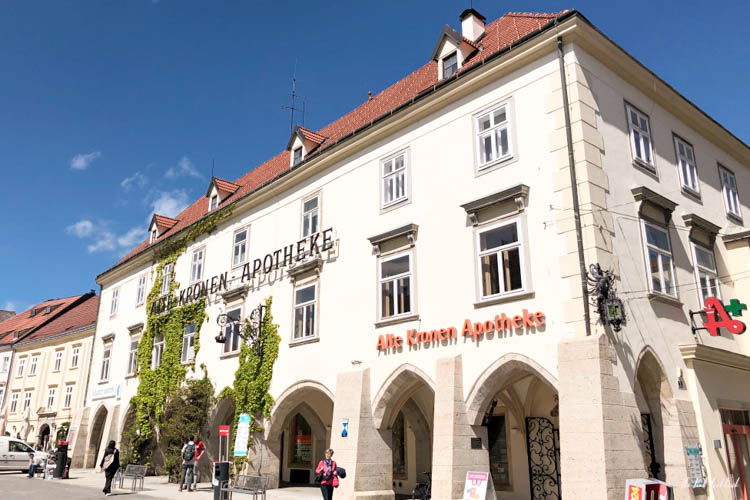 A pharmacie at the Hauptplatz, the main square of Wiener Neustadt

General Information about the Exhibition

Every second year, the state of Lower Austria picks one location for a special exhibition, the so-called “Landesausstellung”. This year, this exhibition takes place in Wiener Neustadt, the town where I spent my teenage years. It is not a typical place on tourists’ bucket lists. Neither is it known for being particularly beautiful. But the history of Wiener Neustadt is very interesting. It was a major hub in the Middle Ages – under the emperors Friedrich III (Frederick III) and Maximilian I. The latter was born in Wiener Neustadt and set the base for a global empire of the Habsburgs – an empire were the sun was said to never set. 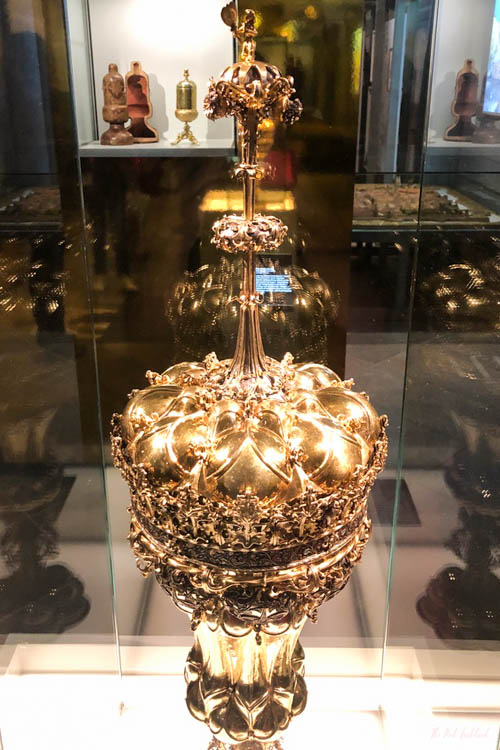 In addition to the two locations, there are four types of city walks which can be booked separately (see the section about tickets below). 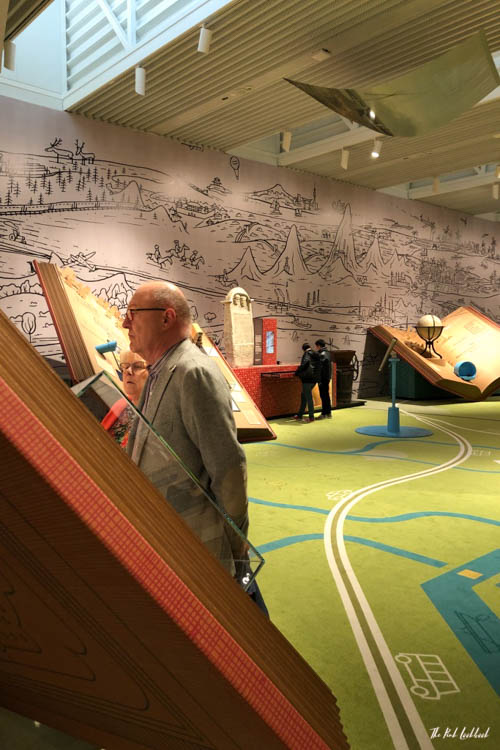 The Kasematten shows how much money was invested – giant books with interactive parts and plenty of objects are the cornerstone of this part of the exhibition.

This ticket involves the entry to the exhibitions in the Kasematten and the Museum St. Peter an der Sperr. 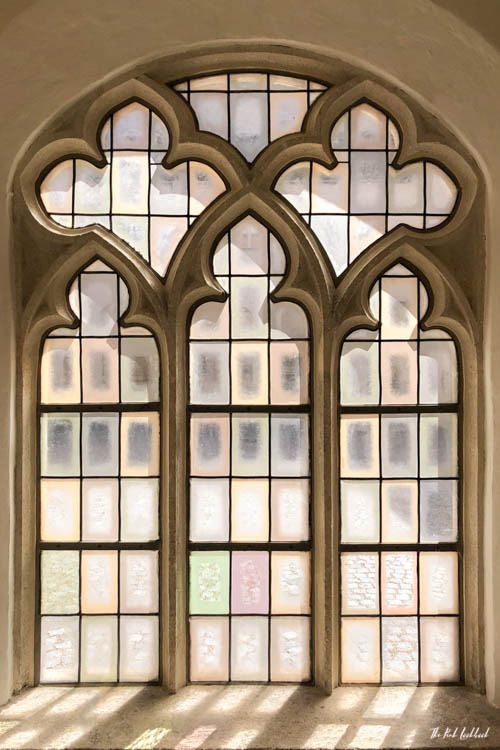 The hallway connecting the museum and the church at St. Peter an der Sperr.

There are guided tours (EUR 3.50 (about USD 4) per person and per location) which take about 75 minutes.

In addition to the two main exhibition locations, there are city tours to visit the Military Academy, the Neukloster Monastery and further locations. These tours have to be booked and paid separately.

I have to say, the website is a bit confusing, I only found out about the ticket types and tours at the museums. 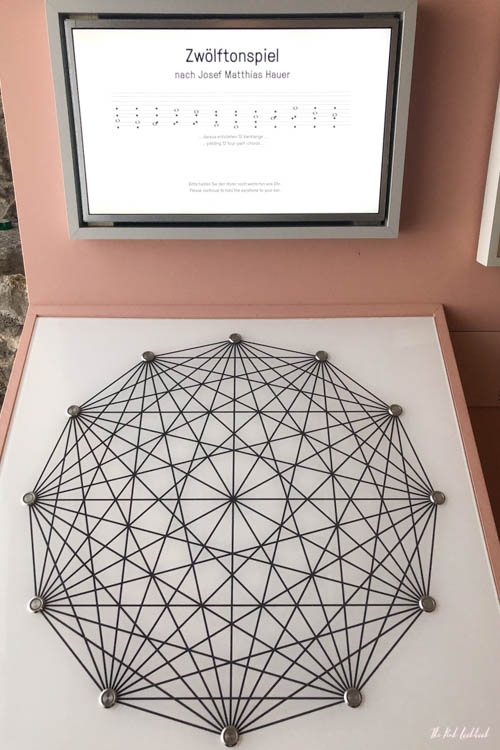 The twelve tone music composer Josef Matthias Hauer was born in Wiener Neustadt. At this station, visitors can “compose” their own twelve tone piece.

Wiener Neustadt is very easy to reach. At every full hour, there is Eurocity train which takes you from Vienna Main Train Station to Wiener Neustadt in half an hour. There are further train options which are a bit slower (45 minutes – 1 hour 15 minutes). A one-way ticket is EUR 11.60 (about USD 13).

The part of the exhibition in the Kasematten, is just a five minutes walk from the train station.

If you come by car, you can either park at the public garages or in the designated short-term parking zones. Both require a fee. 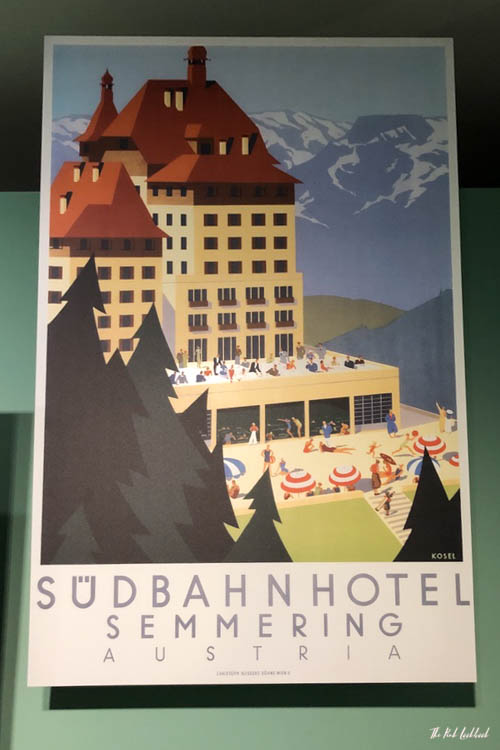 Historic advertising poster for the Semmering region from the 1930s.

Hartig’s Heuriger is just a stone throw away and serves traditional Austrian food. The place was also renovated recently and has a lovely garden. (Domplatz 2)

Directly next to the Museum St. Peter an der Sperr, the new Löwenherz Food Kiosk has just opened. It is in the Bürgermeister Garten (another former rather run-down place turned beautiful park) and offers snacks such as salads, bowls and what they call “Austrian tapas”. They also have healthy and vegetarian/vegan options. (Petersgasse 2)

Ferstl is one of the oldest cafés and “Konditoreien” (ie. patisserie) in Wiener Neustadt. Their pastry, especially the brioche and Burgenländer Kipferl are really nice.

Eisgreissler, the popular ice cream parlour in Vienna, also has a branch in Wiener Neustadt. They have traditional ice cream, vegan ice cream and ice cream with a modern twist. (Neunkirchner Straße 2) 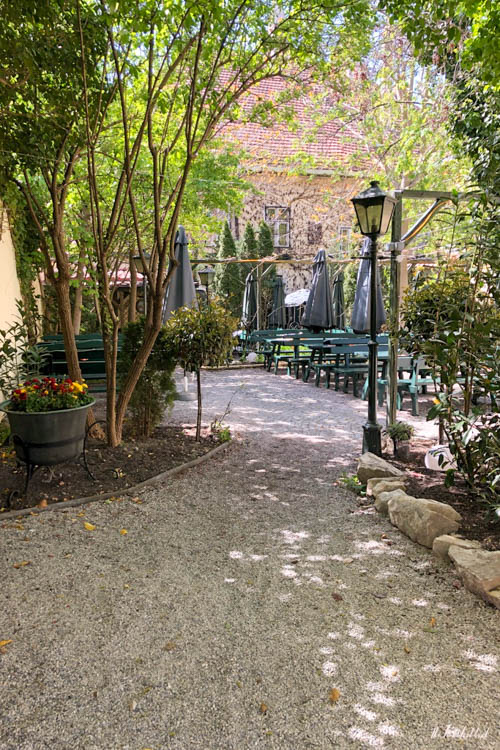 Garden at restaurant Hartig between Museum St. Peter an der Sperr and the main cathedral.

There are not too many hotel options in Wiener Neustadt but the newly opened Hilton Garden Inn is probably the best choice. It is right next to the Stadtpark and the Kasematten and only a 5-10-minute walk from the train station and Wiener Neustadt’s centre. (Promenade 6)

Bike along the Canal

For those who want to combine culture and sports, the bike route along the Wiener Neustädter Kanal (Wiener Neustadt Canal) is the perfect challenge. It starts in Vienna’s Liesing area and is a flat route South until Wiener Neustadt. Follow the signs “EuroVelo 9” – this is the route until the Adria. It is about 50 kilometres and takes about three hours. You can then take the train back to Vienna. 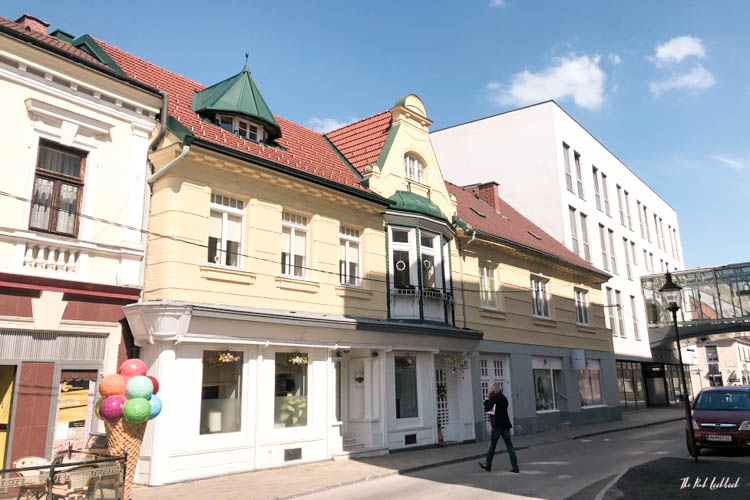 Residential house near the Kasematten

Wiener Neustadt is surrounded by plenty of recreational areas. The Schneeberg is the highest mountain of Lower Austria and there is a funicular “Schneebergbahn” taking you up the mountain. Also try the Buchteln at one of the stops of the funicular. This is a special type of Austrian pastry made of a fluffy yeast dough and filled with jam. 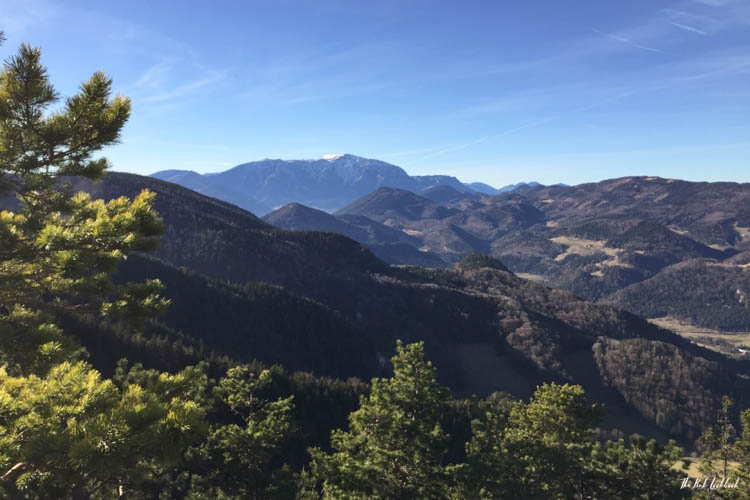 View of the Schneeberg mountain from the Hohe Wand

The Semmering can be easily reached by train from Wiener Neustadt and is a beautiful hiking area. Same holds true for the Rax. Both places used to be holiday destinations for the Viennese upper class in the 19th and early 20th century.

I personally really like Hohe Wand. It is a great place for hikes and walks. Once you are up the mountain it is actually quite flat. You can drive up with your car if you do not want to walk uphill. There is a plateau with a platform for views over the region and you can watch the paragliders.

Bucklige Welt is less known but its hilly landscape is very beautiful. 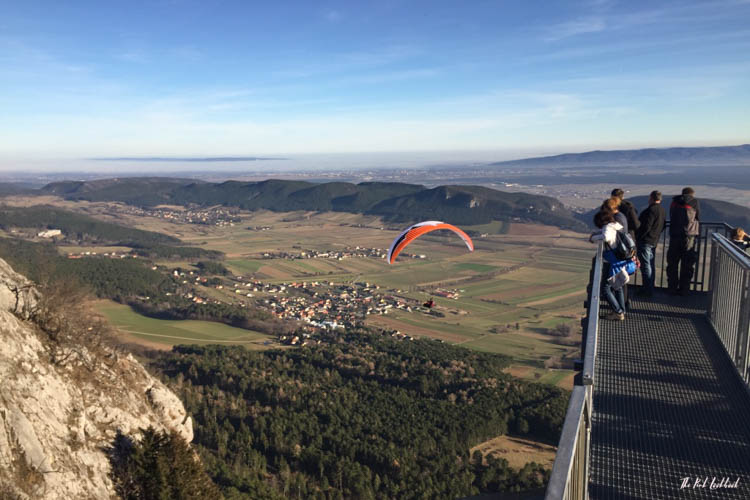 Paragliders and viewing platform at the Hohe Wand

I recommend to start at Museum St. Peter an der Sperr as it gives you a more structured and detailed background. I started at the Kasematten and I found it a bit confusing at first. Even though there was a lot of effort (time- and capital-wise) invested, I had the feeling that the part in the Kasematten lacked a red thread. Some bits and pieces were interesting but I somehow could not connect the dots to Wiener Neustadt. I especially found the lack of introductory texts in both exhibition locations confusing. After visiting the Museum St. Peter an der Sperr, the storyline became a bit clearer. After my visit, I read quite a few reviews and articles about the exhibition and talked to other visitors. I have the feeling that the red thread may become clearer if you visit the exhibition with a guided tour. 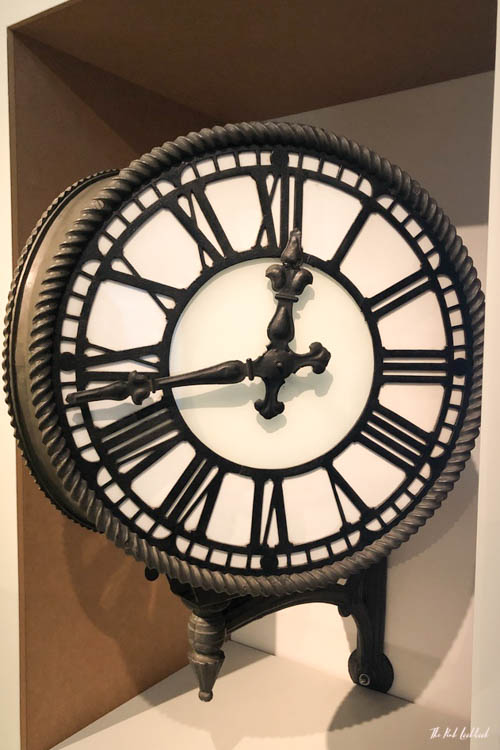 In general, the exhibition shows that no financial effort was spared. The Kasematten exhibition features giant books with interactive stations and plenty of objects on display. The last part of the exhibition is a gigantic digital experiment calculating our CO2-costs for our weekly commutes.

I particularly enjoyed the part in the St. Peter an der Sperr Museum which is about Wiener Neustadt’s history as an industrial city. There is a great interactive projection about the historical locations of factories across Wiener Neustadt. Furthermore, the exhibition introduces entrepreneurs and their business who contributed to the historic industrial and trading hub. 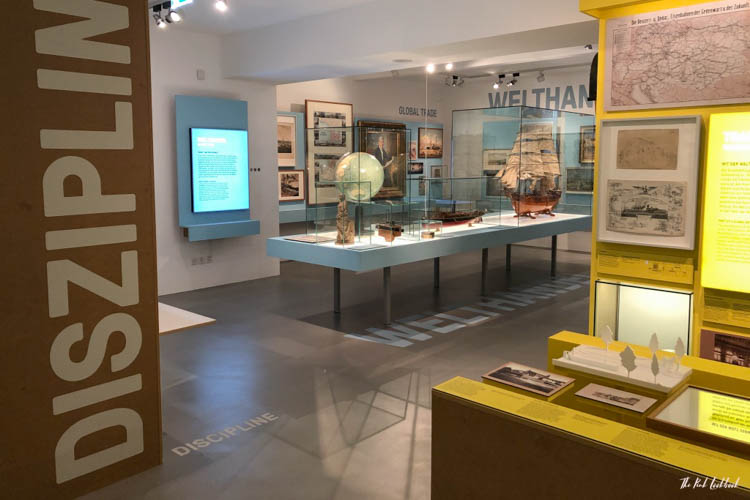 During the Nazi period and the war Wiener Neustadt was a big hub for aircraft production. Hence, it was one of the most bombed cities during the Second World War and also used forced labour. I learned about all of this in high school, but I found it really interesting to learn more details. I also did not know that before that time, Wiener Neustadt attracted a big Jewish community. Looking back, it is natural because it was such a big commercial hub. 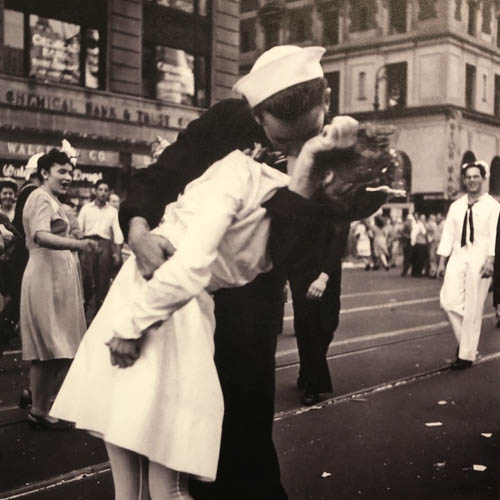 The woman in the famous picture taken at Times Square after World War II ended actually came from Wiener Neustadt. She was a Jewish refugee.

I also learned that the woman on the picture “Kiss the War Good-Bye”, the famous kiss at Times Square, was actually from Wiener Neustadt. Greta Zimmer-Griedmann was a Jewish refugee who left Austria in 1939. I think it serves as a good reminder that in the past, Austrians – who are now living in a country accepting refugees – were refugees themselves in the past.

The infrastructure of Wiener Neustadt definitely benefitted from the exhibition. The Kasematten were not only renovated but major parts of the former arms storage are now on display and accessible. In the Second World War they served as bunkers. For a very long time, the Kasematten were not accessible to the public. The nearby Stadtpark has become a beautiful oasis. It is funny for me to write that because when I was in high school, I used to play tennis at this park. It was actually a rather creepy place with drug dealers. But all of that seems to have vanished. 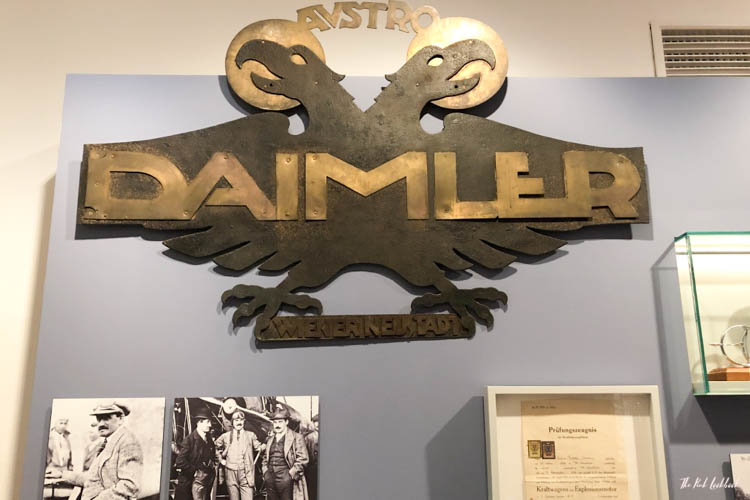 From a culinary perspective, Wiener Neustadt has always been a difficult area. A lot of places come and go. For the exhibition new restaurants have opened and old ones have been kind of “reactivated”. A big problem for Wiener Neustadt is that due to the major developments of malls outside of the city, the centre has died out. I had the feeling that this problem not only persists during the exhibition but is covered up. If you walk along the former major shopping streets, a lot of empty stores have covered windows with posters about the exhibition. I do hope that there is a positive spill-over effect during the exhibition for local shops and restaurants.

Note: This article is a work in progress, as I have not had the chance yet to participate in the city walks. I will update this article accordingly after I have done them.

Lake Neusiedl – The Adriatic Sea of the Viennese

Graz – Hidden Gem in the region of Styria

All information as of the date of publishing/updating. We cannot accept responsibility for the correctness or completeness of the data, or for ensuring that it is up to date. All recommendations are based on the personal experience of Elisabeth Steiger, no fees were received. 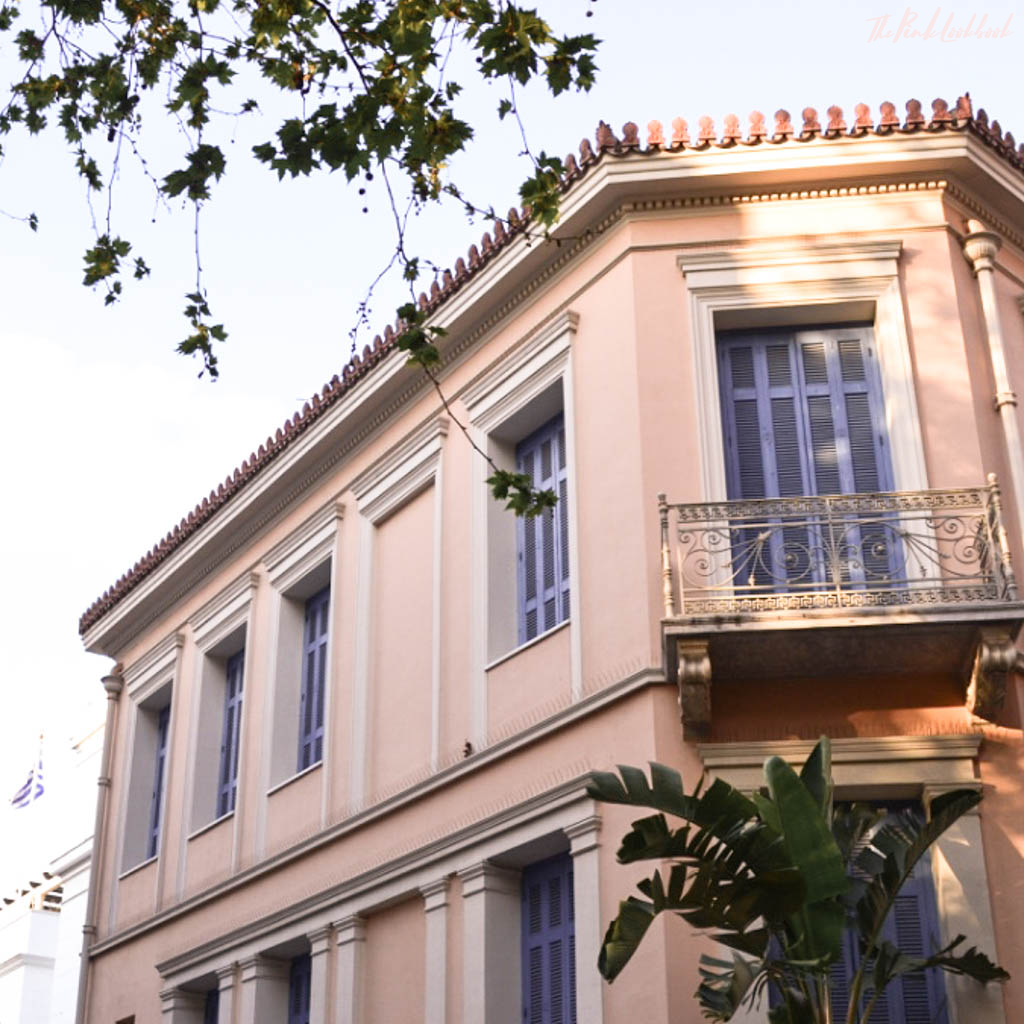 How to Explore the Main Sights of Athens on Foot