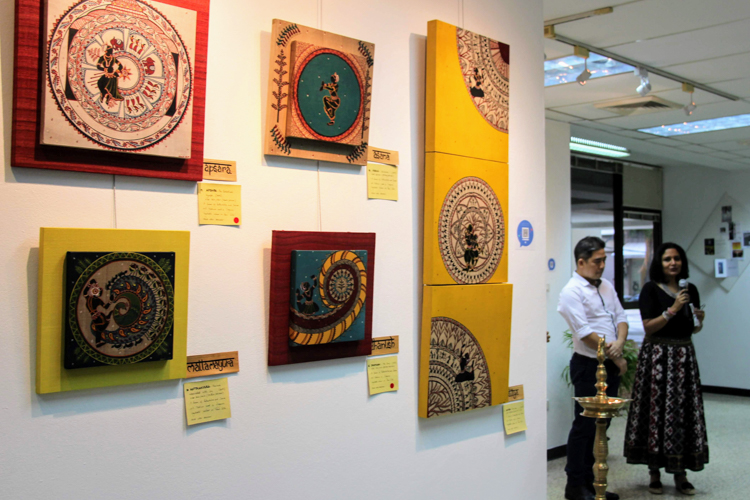 When I first spotted Neerja Tata’s artworks in Bangkok, it felt like diving into a different world – beautiful earthy colours paired with the most intricate figures and patterns you could ever imagine. It felt as if the motifs started moving, I could almost feel the dancers depicted in the paintings dance. As colourful as the paintings is Neerja’s personal journey. The Indian-born artist has lived in multiple countries and is currently based in Bangkok.

We were in Neerja’s painting room and she explained in her very calm and chilled out way how she works. She made it seem as if this was the most meditative and simplest thing. But when you look at her paintings they are far from being simple. Pattachitra, a traditional artform from Eastern India, is based on a vast range of rules and regulations. Neerja Tata interprets this traditional artform in a modern way by adding contemporary motifs and themes. Let’s go on a journey not only through time, but to India, New York and Delhi and along Neerja’s incredible path as an artist. 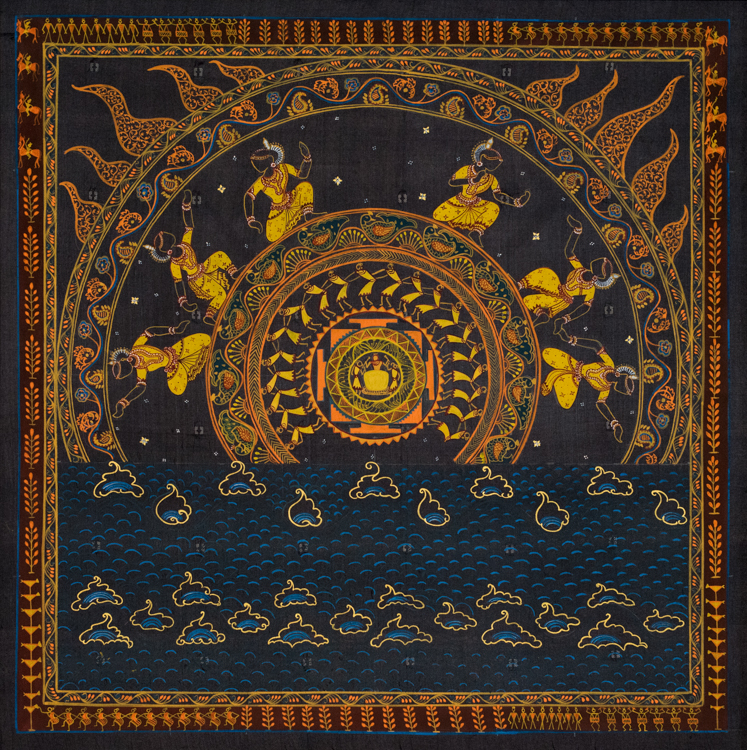 Sandhya – Twilight; Pattachitra is an Indian art form which dates back to the 12th century. Neerja Tata has been dedicating herself to this type of art for over 20 years and interprets this traditional art in a contemporary way.

Neerja never studied art. She earned a Master’s degree in psychology from University of Delhi, India. But she always enjoyed painting. Originally, Neerja is from the Eastern part of India and she returned to region of Odisha when her husband’s job for the Indian Revenue Services took them back to the city of Bhubaneswar. After having children, Neerja searched for a new challenge and stumbled upon Pattachitra art.

This type of art dates back to as far as the 12thcentury. Initially, the art was painted on murals, later on, the artists changed to fabric and palm leaves. The Sanskrit term means “paintings made on fabric” (the word Patta means fabric, chitra means painting). The motifs are based on mythology such as the Ramayan, a Sanskrit epic from ancient India. 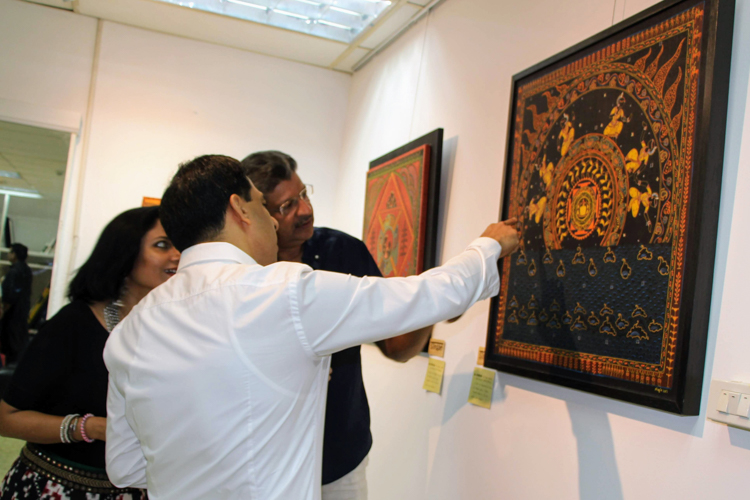 The artist explains her works to visitors at her most recent exhibition “Circles in Motion” in Bangkok in May 2019.

Near Bhubaneswar, in the small village of Raghurajpur, about 180 families of artists have been dedicating themselves to the Pattachitra for generations. Until today, the Pattachitra is the main source of income of these families. Every family member focuses on certain parts of the artworks. Even though there are cheap imitations of the artform, the real Pattachitra of East India has survived thanks to these families and is one of the most famous artforms in India.

The Pattachitra is made of a vast number of rules and regulations to achieve its unique style. The colours are all-natural vegetable dyes and only involve the primary colours red, yellow, green and white and black. Therefore, the tones of the Pattachitra are earthy. There are no colours such as pink, purple or mauve. Nowadays, indigo has also been included. The colours are made of natural ingredients and are powder pigments. The black is made from lamp soot, for example, green is made from certain leaves, yellow and red from stones or minerals and white from shells. The pigments are then mixed with glue – which comes in small “crystals” – and water until the colours become smooth and silky. The glue prevents the colours from running out on the canvas. 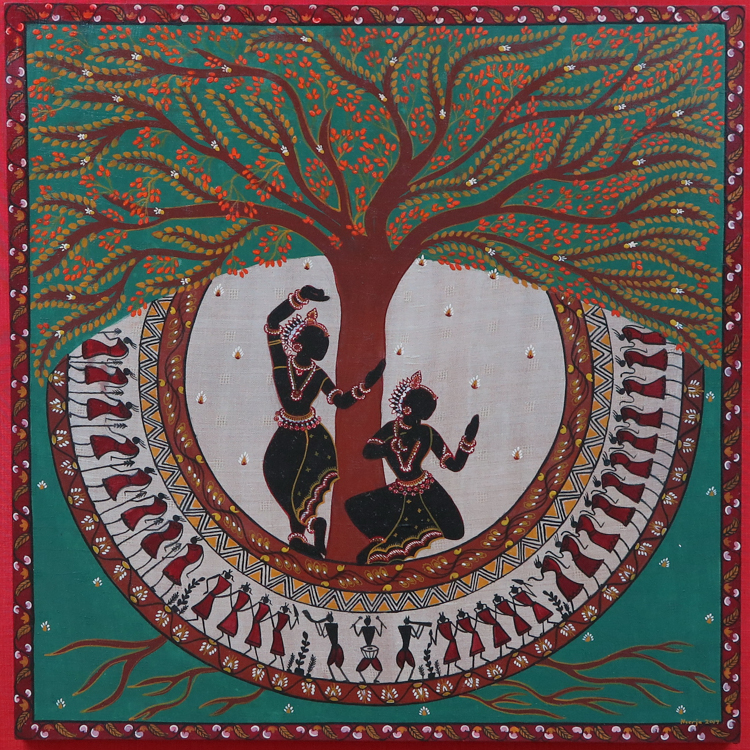 Kalpavriksha – A Sacred Canopy; Traditionally, the colours of Pattachitra art are limited to red, yellow, green, black and white.

Neerja discovered the Pattachitra art by accident, when she walked by the former Chinmayee art school.

“When I saw the paintings, I had tears in my eyes. For some reasons, this type of art triggered something in me, some emotions. I knew I found what I wanted to do, I really wanted to learn this form of art.”

Hence, Neerja signed up for classes. The following two years, she spent every day at the art school, studying the complex techniques and rules of the Pattachitra. Her teacher came from the above-mentioned village of Raghurajpur. She now has been dedicating herself to the Pattachitra for over 25 years. “I have never thought of looking back.”, she says with a big smile which reveals how passionate Neerja is about painting.

Neerja calls the preparation of her work materials a very nice and meditative process. She is in control of the whole process, she even prepares the canvas herself. Pattachitra is usually painted on cotton or silk. Neerja works with the latter – she uses raw, ie. unprocessed, silk which comes in a very light brown colour. The fabric is soaked in water to get rid of excess starch. The canvas is later glued on a wooden frame with tapioca starch, mounted and sundried for 24 hours. Every single material is sourced from Odisha. Because of this all-natural approach, the art could actually be called “organic”. The brushes are usually made of animal hair which stems from the olden days. Today Neerja uses a mix of animal and synthetic hair. The latter offers thinner brushes necessary for the intricate painting. 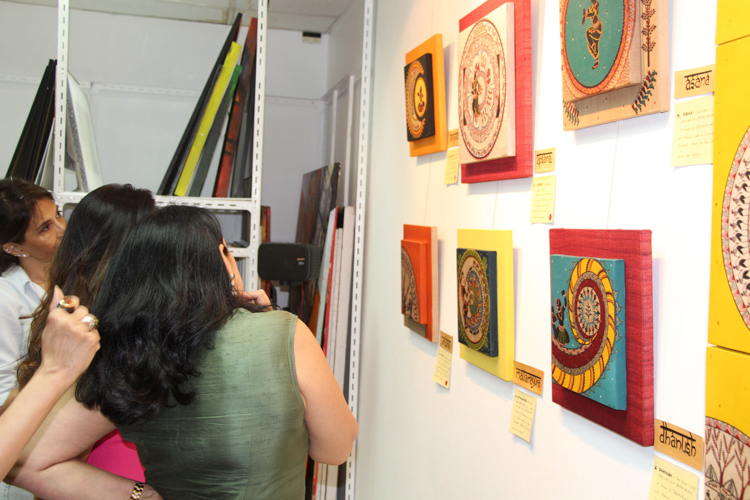 “When I started, I used mythology. There are particular styles and rules: for example, there has to be a certain number of borders, trees, jewellery. Figures, plants and animals have to be depicted in a certain way.” Neerja’s style has evolved from a mere traditional focus to a modern interpretation of this cultural heritage. This development was triggered by her first exhibition which raised funds to support the victims of the earthquake in Latoor, India, in 1996. She was asked to celebrate the strength of women who survived the disaster. Since then, she kept experimenting with a mix of traditional and modern themes and motifs.

Her most recent exhibition “Circles in Motion” in Bangkok focused on the topic of Mandalas. “I take inspiration from anywhere. The mandalas just came to my mind and then I did a lot of research around the topic.”

Mandalas in the West have mostly been known in a rather commercial way – in colouring books, for example. However, their meaning is very important in Hinduism as well as Buddhism: It is all about the universe, life is part of the universe. Everything goes around and comes back. The life is a cycle. 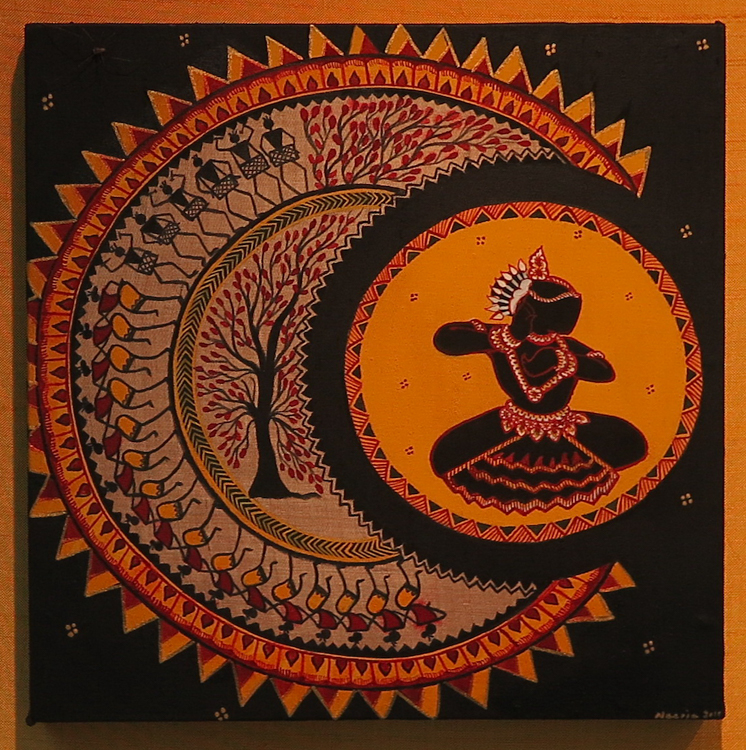 Mandalas have an important meaning in Hinduism and Buddhism considering the life as a cycle. Neerja interpreted mandalas in different ways and added the postures of the traditional Odissi dance.

For this show, Neerja worked on 19 paintings. “I started with a traditional depiction of the whole mandala in wheel-form. During the process, it evolved to focusing more on the mandala itself and I also depicted only certain parts of the mandala – half-mandalas, quarter-mandalas. Every time I started one painting, the ideas for the next painting came up while I was painting. I progressed from one painting to another. All the works involve the Pattachitra, the Saura (note: another traditional art form) and the mandalas. There are similarities in all the 19 paintings.” A second dominant theme of this series was elements of the traditional Odissi dancers. Neerja was inspired by her niece who performs this type of dance. The evolvement of the works was not limited to the painting process itself. Neerja also tweaked the canvas and used two fabrics.

Laissez-Faire vs Discipline; Solitude vs Exchange

“When I paint, I do not make a sketch before I start on the canvas. I have a rough concept which I follow but it also evolves while I am painting.” It is hard to believe that Neerja does not work with any form of sketch to prepare her paintings. The patterns and figures are extremely delicate, intricate and all of them are perfect in shape and size. I could only imagine how much skill, effort and patience goes into each and every painting. 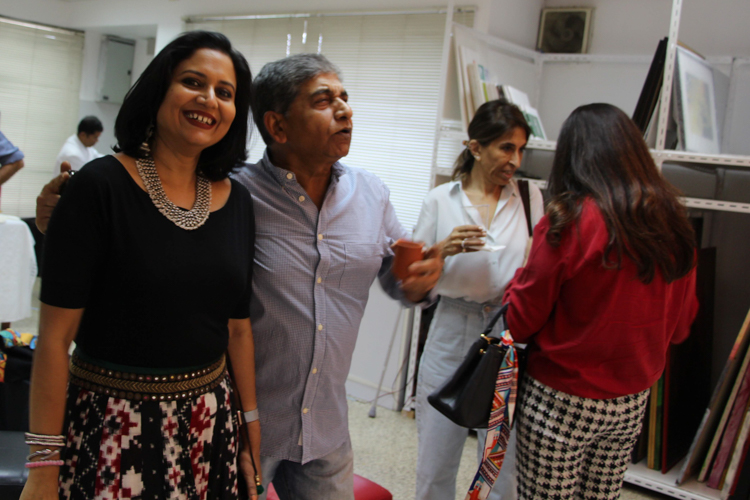 Even though Neerja Tata needs solitude to paint, she also values the exchange with likeminded people and their feedback.

In contrast to this “laissez-faire” approach, Neerja’s work approach and ethics are extremely disciplined. Routines and self-discipline are key for her.

“For me, the whole day is a discipline. I wake up, research, I go to the gym. I prefer working from home. When I am painting, I am in a meditative state and I do not want to be interrupted. From 10 am to 5 pm, I am painting. Sometimes I go to the gym at 11 am but then I come right home to keep painting. I need my routine, otherwise I cannot paint.”

Neerja says that the worst for her is travelling – because it takes her out of her routine. It usually takes her two to three days to get back into her routine after travelling.

Similar to the self-discipline the artist shows when painting, she puts a lot of attention to detail into the way she plans and executes the exhibitions. For her last exhibition, the informational text and descriptions of the paintings were written by hand on palm leaves –the third major material for canvas of Pattachitra art in addition to cotton and silk. No brochures were printed for the exhibition – everything which did not fit on the palm leaves, could be found on Facebook which was accessible via QR code. A modern take on traditional art meets tech. I was really impressed how every single detail was fine tuned. 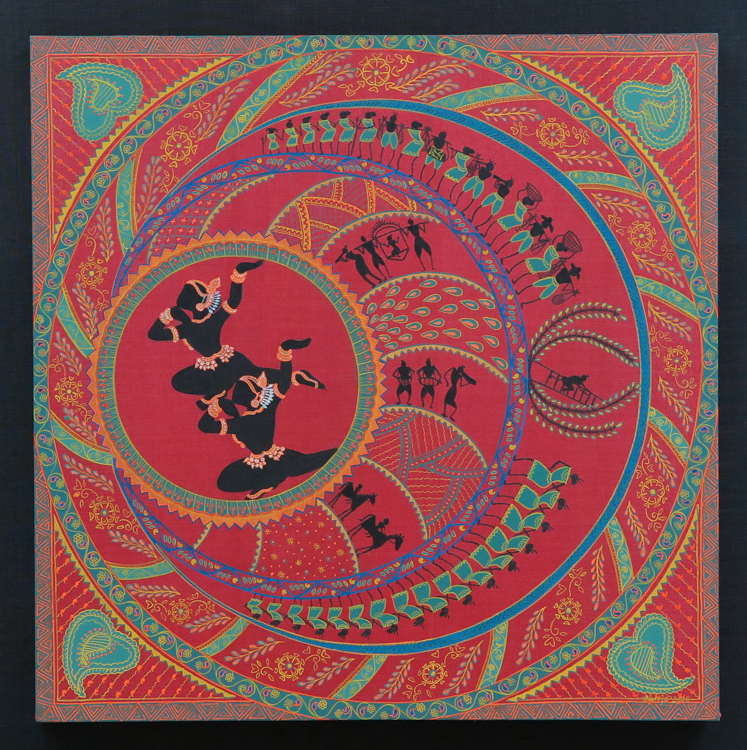 Laya – Rhythm; A closer look reveals the intricate details of the paintings – Neerja achieves all the details without the help of any sketches.

However, her most recent show in Bangkok was not her first one. Neerja exhibited in India and New York long before her move to Thailand. Her first exhibition in Bangkok took place in 2009 and was followed by many more solo and group exhibitions at the Indian Cultural Centre or the Bangkok Cultural Centre amongst others. And there are exciting projects ahead.

Even though she needs the solitude to paint, Neerja also stresses the importance of likeminded people. “I have an artist group of friends and we all talk about our works. It is important to show your works and get feedback. My friends’ feedback actually led me to the decision to do an exhibition. They said my work was so different that I had to show it.”

Neerja Tata holds a Master’s Degree in Psychology from the University of Delhi. She has been dedicating herself to Pattachitra art for over 20 years. She has lived in India, America and currently lives in Thailand. 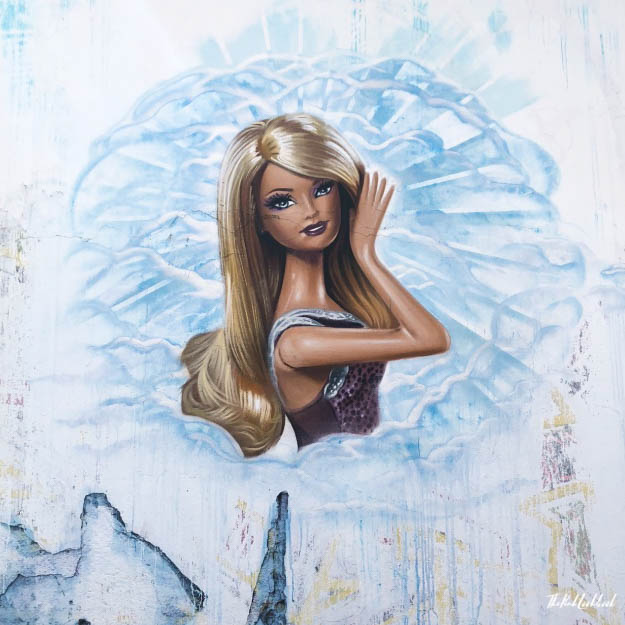 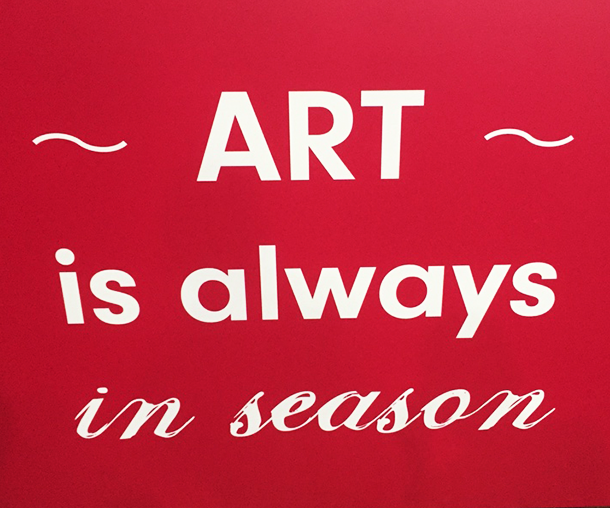 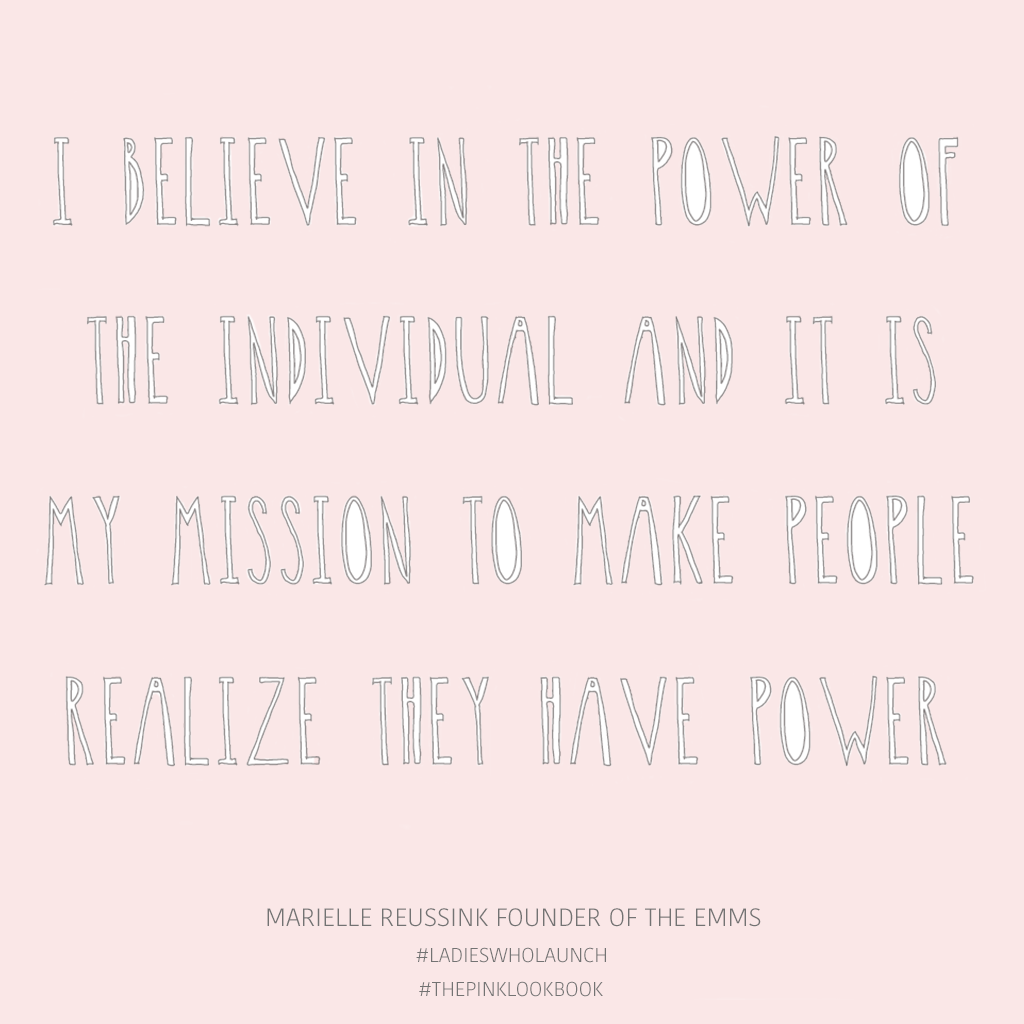 Female Founders, Startups vs. Corporates and the Power of Networking – Meet Marielle Reussink, founder of the Singapore-based marketing company “The EMMS”.