I don’t pretend we have all had the same experiences throughout our varied lives, but I do believe we experience common emotions. I strive to tap into these shared feelings to push viewers beyond merely relating to an image but to call them ultimately to feel something inside that is real.

This was my absolute favourite of the fair! The California-based artist aims at reminding us that “beauty can be found in unexpected places and in everyday encounters, such as a bird flying overhead, an old oak tree or a gritty urban street corner”.

Kelly is a collage artist and for his artworks exhibited in Hong Kong he used vintage Vogue fashion magazines from the 1950s and 1960s – according to Axiom Contemporary, his wife inspired him to use these vintage magazines. His pieces are sealed with a thick coat of resin which protects and polishes the artwork. Kelly is also influenced by the Californian surfer lifestyle (he uses wood that reminds of the surfboards as a basis). (Axiom Contemporary)

When I passed by Bruno Art Group, my attention was immediately drawn to the metal butterfly artworks by Israeli artist David Gernstein. According to the gallery, Gernstein creates “universal, colorful and layered imagery of still-life compositions, urban landscapes and human activity”. Furthermore, his objects aim to be ironical and humorous but at the same time simple and innocent.

Debra Franses-Bean’s transparent handbags are “frozen moments of consumption”. The bags contain lipsticks, sunglasses and other objects that might be very desirable at one point in time but lose their desirability very soon. I thought it was really funny to see an artwork like this in Hong Kong, a city dominated and shaped by mass consumption. (Mark Jason Gallery)

Kadzinsiki is a French artist with a mechanical diploma who later became a model and then a photographer. At first sight, I thought that Kadzinski’s photographs showed Hong Kong because it reminded me of photographs of Mong Kok. However, Kadzinski’s “The Big Apple” series shows the growth of New York City, the tension “amongst old and new, utilitarian and fantastic”. The fire escape ladders stand for the basis of the metropolis which is famous for its skyscrapers: the “small, homely structure” of the brick houses. The artist wants to capture his experience of “what he fears will soon disappear into the voracious maw of the city’s continuous reinvention”. (Emmanuel Fremin Gallery)

Living and working in the Netherlands and China, the artist gracefully combines his Chinese background with the fascination of Europe. Since his move to Europe in the 1990s, Zhuang Hong Yi’s style has always developed further. His artworks involve paintings “with ink, mixed traditional Chinese materials like acrylic and oil paint and rice paper” and are often characterized by a mix of bright colours. Some of his paintings are actually 3-dimensional, among them the one above exhibited at the Affordable Art Fair.

Note: Unfortunately, the light was quite bright and in bad angles and the fair was quite crowded. Therefore, it was a challenge to take nice pictures. The information about the artworks has been taken from the information leaflets and websites of the respective artists galleries. 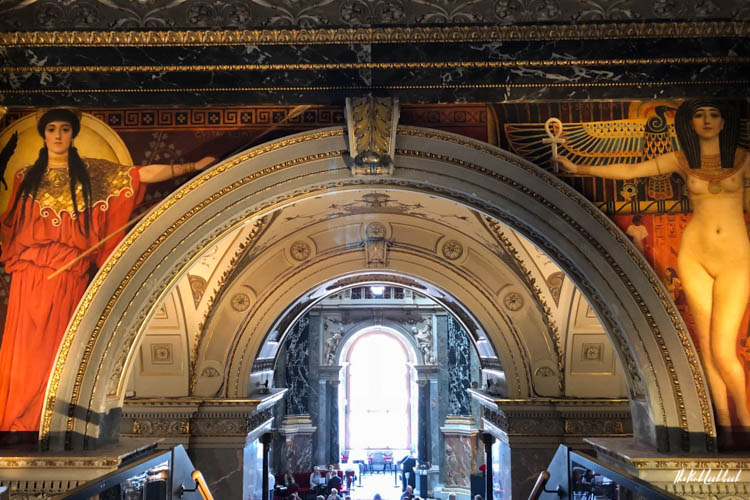