Chiang Mai has always been known for its flourishing art scene. Nevertheless, I only heard about the MAIIAM Contemporary Art Museum by accident. This museum is located in Chiang Mai’s South East – far from the historic old town – it aims at enabling access to contemporary art of Thailand and the region. It is not only worth visiting because of its permanent collection and special exhibitions but also because of the family history of the owners which involves a consort of King Chulalongkorn as inspiration for the museum. 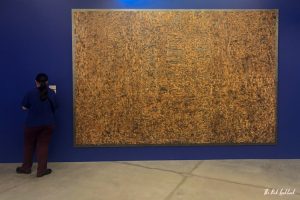 The MAIIAM was founded by Jean Michel Beurdeley, his late wife Patsri Bunnag and their son Eric Bunnag Booth. The family decided to display their private collection in order to inspire others to enrich their lives with art and maybe even become collectors themselves. The works span across the past 30 years.

I personally found it really interesting to hear about the creation of the name MAIIAM, which may sound a bit odd at first. It is a play on words: “Mai” means new city and also relates to Chiang Mai. “Iam” is a reference to Eric Bunnag Booth’s great grand aunt “Chao Chom Iam”. She was a Royal Consort of King Rama V (also known as King Chulalongkorn), who paved Thailand’s path into modernity. Together, Mai – Iam also means “brand new”.

The museum focuses on the contemporary art of not only Chiang Mai but the whole of Thailand and the surrounding region. Its mission is to support living artists with what the museum calls an “inter-generational scope”.

A Woman as Inspiration for the Museum

The Bunnag family history dates back to the 18th century. Chaophaya Akara Maha Sena (Bunnag) served King Taksin and his successor King Rama I, the founder of the current Chakri dynasty. Bunnag married the sister of the queen and his family members continued to work for the royal family. 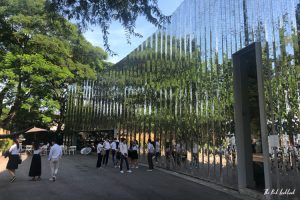 Chao Chom Iam, the above-mentioned great grand aunt was born in 1973 and became one of King Chulalongkorn’s Consorts. (It was the custom that the king had multiple Queens and Consorts.) According to the museum’s website, Chao Chom Iam became one of the King’s favourite consorts. After the King’s death, she kept living in a palace with other Princesses and Consorts until the Siamese revolution in 1932. She left to Suan Nok and lead a quiet live until her death in 1952. She was honoured with a royally sponsored cremation.

The museum was designed by the architectural firm Rachaporn Choochuey who converted a former warehouse. The architects’ approach is to let the art and not the architecture be the main attraction. The industrial spirit is still present and it is paired with links to Chiang Mai’s long heritage: the building front facing the road is covered with tiny decorative mirror tiles referencing temples in the old city. 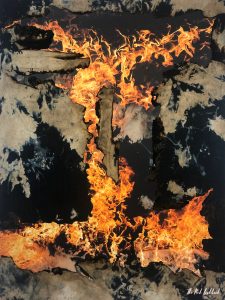 The permanent collection aims at offering a glimpse into Thai contemporary art. According to the museum, Thai contemporary art started in the 1980s and 1990s. The MAIIAM focuses on avant-garde artists such as Montien Boonma who lived in Chiang Mai. The artists around Boonma later became important influencers and mentors for future artists in the region. They occupied themselves with current topics and social trends such as political, societal and economic developments including consumerism, economic bubbles and the economic crash in the region after the Asian Crisis in 1997. Their individual styles, languages and mediums range from painting, to photography, drawing, prints and installations. The artists drew attention to topics such as gender, migration and identity in the age of globalisation.

For the first time, I was exposed to the works of Korakrit Arunanondchai, who was born Bangkok in 1986 and now lives between Thailand and New York. (Artwork on the left) He is an artist and filmmaker and occupies himself with the overlapping of religious and spiritual beliefs, technology, science, politics and communication. In his work, he aims at showing the convergence of Western art history and the global economic markets. According to the artist, denim, like no other material, has influenced many cultures across the world, impacted fashion and stands for contemporary lifestyles. At the same time, this primary material for his work, stands for industrialisation, colonialism, mass production and consumption and soft power.

During my visit, there were two current exhibitions: “Temporal Topography” and the first solo exhibition in Asia of Spanish female artist Pilar Albarracín.

“Temporal Topography” focuses on the motif of landscape in the context of geo-politics and social-cultural landscapes and the artists’ interpretation of topographical reality. Hence, the exhibition involves (video) installations, sculptures, paintings, collages and photographs dealing with urbanisation, territorialisation and how these may lead to conflicts or even violence. The artworks are those who have been acquired by the museum after 2010. 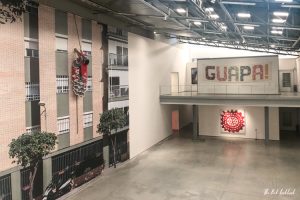 Pilar Albarracín works between her hometown Seville and Madrid not only plays with the clichés and stereotypes of Andalusia and Spain and Spanish society but deconstructs them. Referred to as a “feminist, a mother, an artist, an Andalusian, a Spaniard” by the MAIIAM, she incorporates Spanish folklore in her works by using the traditional polka-dotted outfits or incorporating processions. She addresses national politics but also social classess, gender and the gap between private life and what is addressed or shown in public by using a diverse range of media – from videos, to installations, photographs, drawings and performances. The artists merges folklore, traditions, customs, religious myths and festivals with the role of women in society and distribution of power.

At the MAIIAM, there is a giant installation of a woman in a polka-dotted dress climbing down a wall of a residential building. Albarracín’s photograph “No Comment” shows a woman smoking on a balcony. She was stabbed in back with multiple knives. Nevertheless, she effortlessly smokes her cigarette. She is so used to being stabbed in the back. “See what you refuse to see” and “See the daily life of women” are written on the handles and blades of the knives. 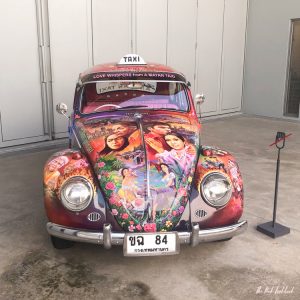 If you are interested in learning more about Thai contemporary art, the MAIIAM is worth the half-hour trip from the city centre. However, if you are in Chiang Mai for the first time, maybe only for a few days and are not too enthusiastic about art, I think the drive might not be worth it for you. It will take about four hours of your day and really depends on your personal interests and preferences.

I enjoyed my visit as I discovered some artists who I had not known before. In my opinion, it would be useful to provide more explanatory texts. For some artworks – especially those of the permanent collection on the second floor – only the title and the name of the artist were provided.

I would appreciate to learn more about the artists and what they wanted to achieve with their works. Unfortunately, I could not find any catalogue or audio guides. Paired with the lack of information right next to the exhibits, a lot of information about artworks is not accessible for the visitros. In my view, contemporary art can be abstract and very often needs more explanation – especially if you are from a different region or country or if you know little about contemporary art in the region.

The museum also has a shop with interesting local products. Because it is Chiang Mai, of course, there is also a stylish café connecting the shop and the exhibition rooms.

The MAIIAM is open every day except on TUESDAYS from 10.00 to 18.00. Please bear in mind that the museum is closed on Tuesdays. (I thought it would be closed on Mondays – which is usually the day most museums are closed – and stood in front of closed doors when I first went there.) 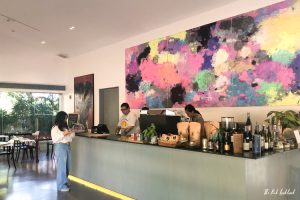 The MAIIAM also offers free entry for student groups on Wednesdays and Thursdays (booking in advance is required).

How to Get To the MAIIAM

The museum is located about half an hour from the city centre. I recommend going there by taxi.

In any case, use the mirror wall of the building as a way of recognising the museum. If you come from the city, the museum is on your right.

All information as of the date of publishing/updating and based on the personal visit of Elisabeth Steiger and the information provided at the location and the official website of the MAIIAM. We cannot accept responsibility for the correctness or completeness of the data, or for ensuring that it is up to date. All recommendations are based on the personal experience of Elisabeth Steiger, no fees were received by the recommended places above. 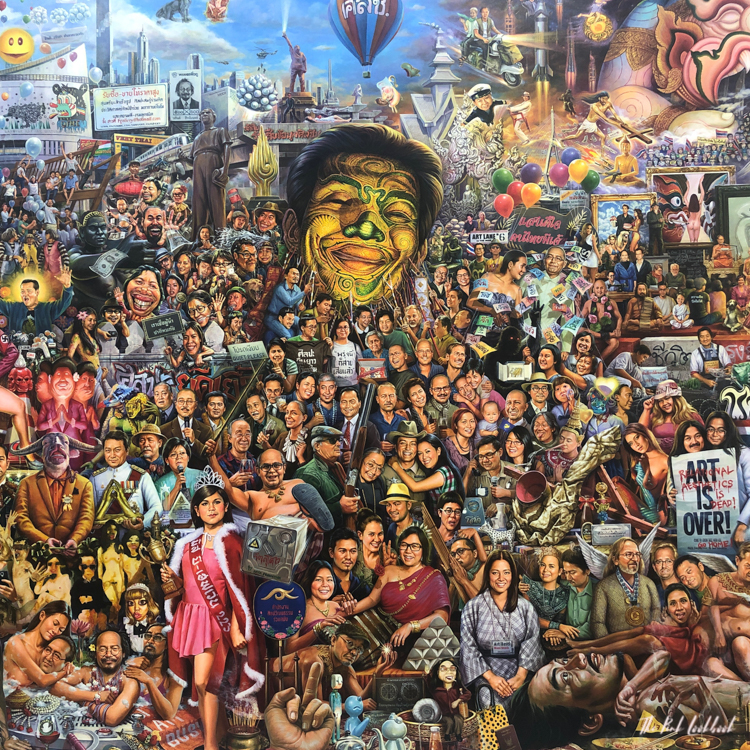 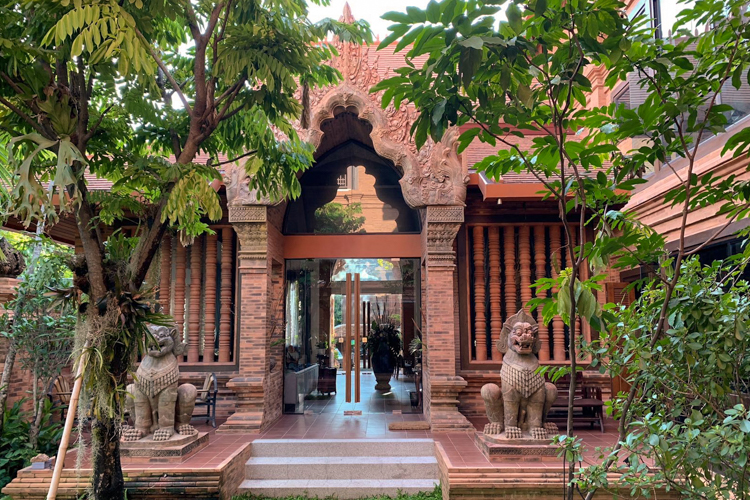 How the Chinese Ancient Town of Fengjing became a Graffiti Centre 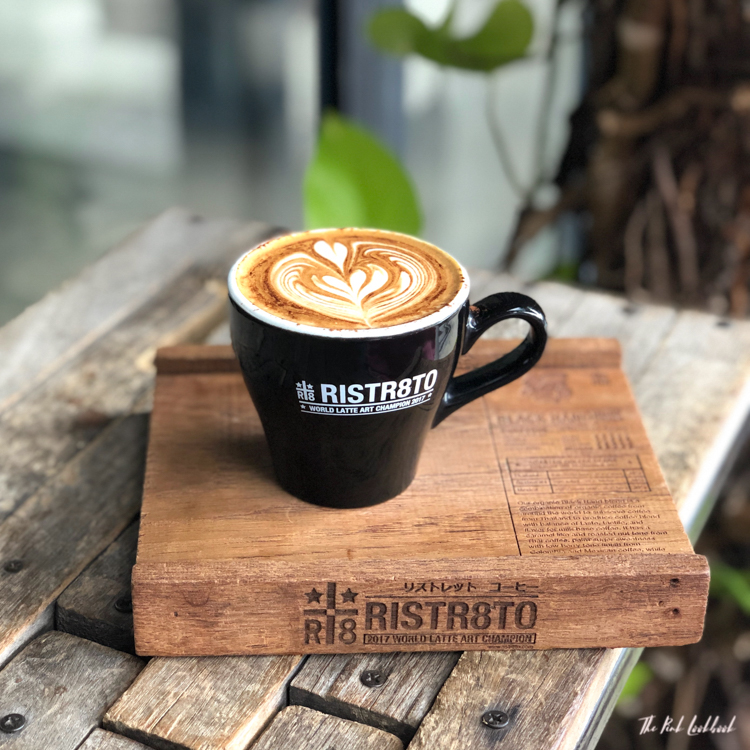 Where to Get the Best Coffee in Chiang Mai